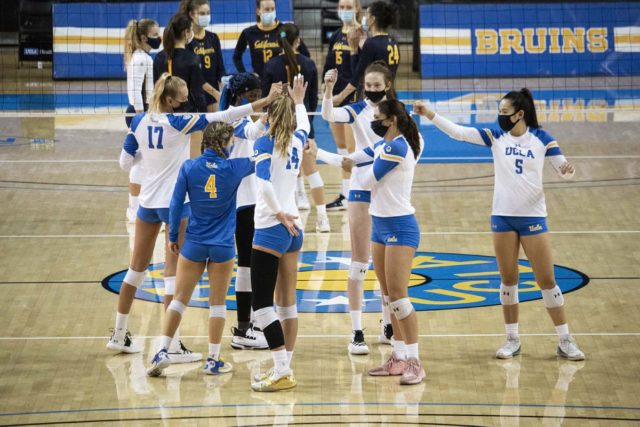 No. 16 UCLA women's volleyball has yet to lose a game this season, but it takes on No. 25 San Diego and San Diego State over the weekend, a pair of teams it hasn't faced since 2018 and 2012, respectively. (Christine Kao/Daily Bruin staff)

Following an undefeated tournament in Long Beach, the Bruins are on the road again.

The Bruins haven’t played the Toreros since 2018 and the Aztecs since 2012, with UCLA taking both of those matches.

As a transfer from San Diego, senior defensive specialist/libero Kelli Barry said she is excited and nervous to return to her alma mater.

“I’m really excited to see everyone. It’s kind of fun to finish off my volleyball career where I started,” Barry said. “ I’m a little nervous. … But I think it should be a really fun game. They’re a really good team – they always have been.”

The top hitters of San Diego and San Diego State average 3.88 and 3.05 kills per set. In contrast, UCLA is sitting on graduate student outside/opposite hitter Mac May’s 4.22 kills per set.

Three weeks into the season, UCLA has a better rank and record than each of its opponents in this invitational, but coach Michael Sealy said it will still be a challenge.

“USD is always a perennial top-15, top-20 team, so they are always a challenge,” Sealy said. “San Diego State. I know the results on paper don’t look as good, but they’ve taken some sets off some really good teams. They’re going to be tough. … I expect that we’re going to get both of those teams’ best efforts.”

The two matches kick off at 7 p.m. on Thursday and Friday.

The Bruins’ title defense is off to an unbeaten start.

No. 1 UCLA men’s water polo (4-0) kicks off its second week of play this season with a home game against No. 13 UC Irvine (2-0) followed by a doubleheader at the Inland Empire Classic in Claremont against No. 8 UC San Diego (3-1) and Pomona-Pitzer (3-1).

The Bruins began the season with double-digit margins of victory over Biola and Whittier, as well as a pair of two-goal wins over No. 14 California Baptist and then-No. 6 UC Santa Barbara, despite missing multiple players.

“UCLA has never been a team that relies on one person,” said senior attacker/utility Jake Cavano. “Each person needs the group to be successful.”

The blue and gold will have the chance to continue its fast start when it hosts its first home game of the season Friday against the Anteaters. After playing through the previous season behind closed doors, the Bruins are set to welcome back fans to Spieker Aquatics Center for the first time since a 10-7 loss to USC in 2019.

Cavano said the return of fans might be a different experience for players than in past years, adding that having the fans back early on in the season will allow the team to become acclimated to new conditions.

“It’ll definitely be a culture shock,” Cavano said. “It’s completely different. It completely changed the complexion of a lot of teams’ and players’ emotions.”

In addition to its home opener, the Bruins will also take on the Tritons and the Sagehens on Saturday in Claremont. Entering the weekend, all three of the Bruins’ opponents are a combined 8-2 and have outscored their opponents by 73 goals during the opening weekend.

Despite the opposition’s high early-season scoring totals, Cavano said the team is taking each game one at a time.

“It kind of depends on who you’re playing and how the game is going,” Cavano said. “We got to prepare for each of them one step at a time.”

Opening sprint against UC Irvine is set for Friday at 5 p.m. at Spieker Aquatics Center. The Bruins’ first game Saturday in Claremont is scheduled for 11:40 a.m. against UC San Diego, while the second game will begin at 4 p.m.

The Bruins will head into their last game before conference play with a chance to extend their three-game winning streak.

UCLA men’s soccer (3-1) is facing off against Portland (2-2) on Friday at Wallis Annenberg Stadium for the second matchup of a five-game homestand. The Bruins have not lost a game since losing 2-1 in their season opener against Lipscomb. In addition, their current three-game winning streak is their longest since the 2018 season.

Despite the wins, coach Ryan Jorden said the team is still making mistakes and will be looking over its previous games in preparation for the match against Portland.

“We’ll look at the videos and try to identify the key areas that we have to continue to be cleaner in,” Jordan said. “Obviously, we will take a look at what we need to do effectively to counteract what Portland’s trying to do.”

In its most recent game against Cal State Northridge, UCLA scored four goals, as many as they had scored in the previous three games of the season combined.

Sophomore defender Tommy Silva said the Bruins have been able to find a good rhythm and will be using a similar game plan to the ones that worked in the previous three games.

“I think we will take a similar approach and look to carry off the momentum we have,” Silva said. “We want to defend our home stadium.”

UCLA will host Portland on Friday at 7 p.m.

Lin was an Assistant Video Producer and a Sports contributor on the women's volleyball beat, and is a second-year psychobiology student. She was previously a 2019-2020 video contributor.