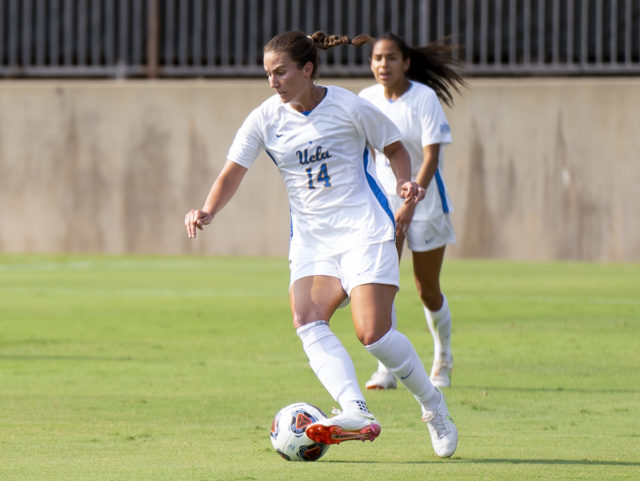 Graduate student midfielder Olivia Athens scored her first points of the season with a goal and an assist as then-No. 4 UCLA women's soccer earned its sixth consecutive win to begin the season. (Esther Ma/Daily Bruin)

Six up, six down.

Then-No. 4 UCLA women’s soccer (6-0) defeated Cal State Northridge (1-7) 3-0 on Monday night at Wallis Annenberg Stadium. The victory marks the sixth straight win to open the season for the Bruins and the sixth straight loss for the Matadors.

UCLA got the victory just three days after a battle with the defending national champions, then-No. 8 Santa Clara, which saw the blue and gold come out on top with a 1-0 win.

Junior forward Mia Fishel said even though the team was a little fatigued, they knew what they had to do Monday night to get the win.

“We knew that we had to try to keep the (energy) levels up,” Fishel said. “It was such a quick turnaround so our legs are pretty dead from Santa Clara and we had just two days to rest and get this (win).”

The Bruins opened Monday night with a handful of lineup changes from its win Thursday.

“Nothing changes as a team (if we change the starting lineup),” Fishel said. “It doesn’t matter – we all do our best, we all know that we contribute to the team and it showed. I’m just super proud of everyone.”

Despite the personnel changes, the Bruins opened the match on the offensive, with sophomore forward Reilyn Turner hitting the goalpost in the fifth minute. Just 20 seconds later, Fishel found the back of the net for her fourth goal of the year to put UCLA up 1-0.

Fishel didn’t stop there, tallying a handful of shots that forced the CSUN goalkeeper to make two saves. In the 27th minute, UCLA got its second goal of the match when Turner found the back of the net for her fifth goal in the last three games.

Turner and Fishel combined for seven shots on goal in the first 27 minutes.

“They are two of the most dangerous forwards in the country,” said coach Amanda Cromwell. “They’re always looking for each other and combining and being dangerous. I’d like the scoring to be more efficient, but I got to be happy with the shutout and three goals.”

The Bruins’ offensive barrage continued through the end of the first half, as they finished the half with 10 shots to just three from the Matadors.

But CSUN flipped the script early in the second half, taking two shots in the first three minutes, with the latter forcing senior goalkeeper Lauren Brzykcy to make her third save of the game. Brzykcy was coming off a career-high-tying nine saves against Santa Clara on Thursday that earned her Pac-12 Goalkeeper of the Week honors.

In the 60th minute, graduate student midfielder Olivia Athens put the Bruins up 3-0 with her first goal of the season. Athens tallied her first point of the season earlier in the match, when she assisted on Fishel’s opening goal.

Despite 10 shots from CSUN in the game, UCLA finished the game with its fifth consecutive shutout, while Brzykcy – who made six saves on the night – extended her streak to 450 minutes without giving up a goal this season.

Athens said the Bruins have emphasized improving their defense from last year.

“Our backline is killing it,” Athens said. “You can’t lose if you don’t get scored on, so our mentality has been we don’t concede.”

On the offensive side, six different players tallied a shot attempt as the Bruins got off 16 shots after being limited to just six attempts Thursday. UCLA’s three-goal night was its fourth such performance in six games on the year.

The blue and gold will have two days off before it heads south for a pair of contests against San Diego and San Diego State.