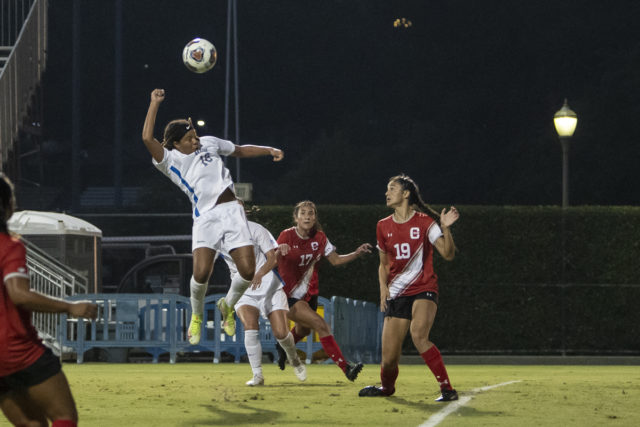 Mia Fishel earned a first in her homecoming.

In her first collegiate start in her hometown, the San Diego native and junior forward for the Bruins notched her first brace of the season.

“It was amazing (to play in San Diego),” Fishel said. “I remember as a kid coming to the UCLA and (San Diego) games, so it was really cool to come back and experience it.”

Behind Fishel’s two scores, No. 3 UCLA women’s soccer (7-0) defeated San Diego (4-3) 2-0 on Thursday night at Torero Stadium. The Bruins extended their shutout streak to six games as they improved to 7-0 for the second straight season.

Another Bruin who made her return to San Diego was graduate student midfielder Marley Canales. Like Fishel, Canales said she also used to come to UCLA versus San Diego games as a kid and added that it was amazing to talk to the young girls after the game who remind her of herself at that age.

“It was really cool to see all the little (San Diego Surf Soccer Club) girls after the game and see how the roles have been reversed now,” Canales said. “It was something really special, and I am really happy we were able to come down here for my last season.”

Starting off the scoring for the Bruins in the 36th minute, Fishel took a chip pass from redshirt sophomore forward Sunshine Fontes and buried her fifth goal of the year to put the blue and gold up 1-0.

Minutes earlier, freshman forward Lexi Wright, another San Diego native, subbed onto the field to make her collegiate debut. In the 45th minute, Wright sent a pass outside that redshirt junior midfielder Madelyn Desiano crossed into the box for Fishel to head home her second score of the evening.

“I thought Lexi and Mia combined really well, and I feel like Lexi is just scratching the surface for what she is going to do for us,” said coach Amanda Cromwell.

Entering the game at No. 4 in the nation in assists per game, Desiano tallied her seventh assist of the year on the field to Fishel.

“(Desiano) plays so aggressively as an outside back, and she defends well,” Cromwell said. “The work she puts in getting up and down the field is incredible. She has done awesome.”

The Bruins put the pressure on the Toreros early in the first half, including four free kicks and one corner kick in the first 13 minutes, as well as a shot fired over the crossbar by freshman defender Lilly Reale in the 15th minute. Graduate student midfielder Olivia Athens – who scored her first goal of the season Monday with a header – added another opportunity for UCLA, just missing a header in the 22nd minute.

Sophomore forward Reilyn Turner had her first shot of the night prior to Fishel’s goal, as she wound up with a breakaway in the 26th minute with an opportunity to extend her goal-scoring streak to four games. The forward’s shot, however, went straight into the waiting arms of the San Diego goalkeeper.

The Toreros had a breakaway opportunity of their own in the 55th minute, but senior goalkeeper Lauren Brzykcy came out to challenge the one-on-one and made the stop. Tallying her fifth solo clean sheet of the season, Brzykcy has now played 540 straight scoreless minutes between the posts this year.

UCLA did not manage to find a goal in the second half but finished the game with 15 total shots and eight shots on goal.

Cromwell said her team’s offense was much better in the second half, even though the Bruins were unable to find the back of the net.

“We didn’t score, but we were much more dangerous and had much better possession,” Cromwell said. “We actually were able to create a lot more chances, we were just unable to score.”

UCLA will stay in San Diego for a few more days as it takes on San Diego State on Sunday to close out the two-game slate.

Fenn is currently a Sports reporter on the women's soccer beat. He was previously a contributor on the beach volleyball and men's and women's golf beats.