Battle of the Editors: UCLA’s most exciting game day experience 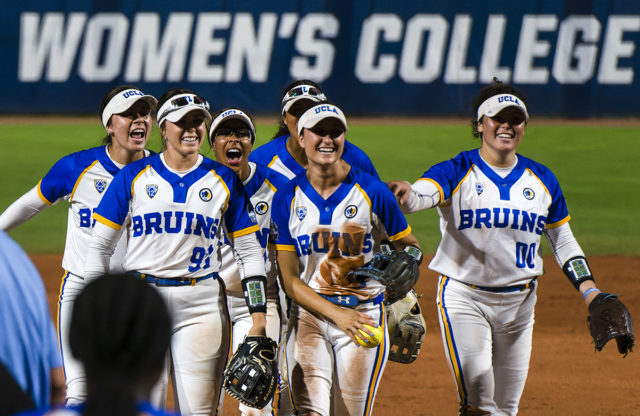 UCLA softball finished the 2021 season with a 47-7 record, a Pac-12 title and a trip to the Women's College World Series. The Bruins lost pitcher Rachel Garcia from that team, but return most of the rest of the roster heading into the 2022 season. (Christine Kao/Daily Bruin staff)

The start of the 2021-2022 school year has arrived and with it comes a number of Bruins making their inaugural campus visits. For those who have yet to step foot in Westwood, it may be challenging to gauge which sporting events to attend. Luckily for them, the Daily Bruin Sports editors studied and debated this topic, deciding which UCLA sport will be the most exciting this upcoming year – from a fan’s perspective.

But while the pitcher was the spark plug to many electric Bruin teams, the departure of the 2021 Collegiate Woman Athlete of the Year will not end the legacy of dominance and entertainment from UCLA’s most exciting team.

The blue and gold will both return and add ample talent to make up for Garcia’s contributions at the plate and in the circle. Rising redshirt sophomore utility Maya Brady’s clutch at-bats throughout the past two seasons, including her first home run of the 2021 season, which went viral on Twitter, show she is poised to become a star this year.

Pitching-wise, rising redshirt junior Megan Faraimo, who will replace Garcia as the Bruins’ ace this season, ended the 2021 campaign with a team-leading 1.10 ERA and 19-3 record while also tossing a perfect game in February.

After clinching the Pac-12 regular-season title, UCLA appeared in its seventh straight Women’s College World Series last season and is shaping up to go for an eighth consecutive showing, with many key roster members returning to Westwood. The Bruins also finished last year with a 47-7 record, good for the highest winning percentage of any UCLA team that played at least four games.

So despite losing arguably one of the most decorated and talented two-way players in collegiate softball, the Bruins will have no trouble picking up plenty of wins in the upcoming campaign.

However, watching UCLA play isn’t just about wins. Located at the northmost point of the Hill, Easton Stadium is both accessible and a fun place to watch games, featuring a team that has no trouble creating excitement both on the field and in the dugout.

The Bruins have a knack for decisive, dominant victories as they induced mercy-rule wins 14 times throughout the previous campaign while also scoring at least six runs in 33 contests. They were also not without nail-biters, making for a dynamic mix of blowout wins and edge-of-your-seat matchups.

In a collegiate sport that is growing in viewership and national recognition, UCLA softball is poised to put on a show for Bruin fans this year.

Most of the basketball love in Westwood this year will go to the men’s program.

And part of that is warranted, given the fact that the men are coming off the school’s first Final Four appearance since 2008.

But what if I told you they weren’t even the best basketball team on campus a year ago?

That’s right. That title belongs to the women’s squad, which is coming for that crown again this year.

UCLA women’s basketball was ranked in the AP top 12 for the entire 2020-2021 season and spent some of that time sitting in the top five. While their season ended in disappointing fashion in the second round, the Bruins finished third in the Pac-12, arguably the best women’s basketball conference in the country.

Despite losing forward Michaela Onyenwere to the WNBA, the roster top to bottom is one of the deepest in the country, and with junior guard Charisma Osborne headlining the returning talent, UCLA doesn’t lack any top-end star power. The Bruins also added a number of transfers in the offseason, including graduate student forward IImar’I Thomas, who scored 50 points in a single game last year with Cincinnati and will likely average north of 20 points per game again this season.

With this stacked roster, coach Cori Close’s new offense – which features a more modern approach and an emphasis on running in transition – could lead to some high-scoring tallies in favor of the Bruins.

There are few experiences that rival watching a basketball game in the historic Pauley Pavilion, and with the stadium right on campus, the entire student body can watch these high-scoring games fairly easily.

But again, the focus is on basketball – the best sport UCLA has to offer. UCLA women’s basketball just offers a better and more exciting viewing experience – plain and simple.

At one point in time, success in men’s basketball was as synonymous to UCLA as the sunny SoCal weather.

So when the Bruins reached the Final Four last season for the first time in 13 years, it felt like a breath of relief after decades of relative mediocrity.

After an up-and-down regular season, UCLA came bursting onto the scene in the NCAA tournament with a string of upsets to become the fifth No. 11 seed in history reach the Final Four. Though the matchup ended in a heartbreaking loss against then-undefeated Gonzaga, the run gave fans a glimpse of the future, and boy is it bright.

Coach Mick Cronin proved his doubters wrong while players like junior guard Johnny Juzang and junior guard/forward Jaime Jaquez Jr. made their names known around the country with a slew of clutch shots and highlight-reel plays.

The Bruins will return every player from their March Madness run while adding a consensus five-star recruit in freshman guard/forward Peyton Watson and one of the top transfers in redshirt senior center Myles Johnson to their nucleus.

Slotted as high as No. 1 in offseason rankings, the hype and expectations are the highest they’ve been in a long time for men’s basketball, which could be the top attraction in Westwood once the new season starts – not just among students but among the general public as well.

During UCLA’s improbable NCAA tournament run, the team drew the eyes of millions more around the country in addition to virtually everyone in Westwood. Representing the school on the national stage, the Bruins did not disappoint.

With matchups against Gonzaga, North Carolina, Villanova and Marquette already on the regular-season slate, this season has the makings for an even more exciting campaign with a good chance for the blue and gold to make another run for the national championship.

Pauley Pavilion should be packed at every men’s basketball game this season after a one-year hiatus from fans, and for good reason – it’s a special time to be a Bruin fan.

No other UCLA team has a resume quite like women’s water polo.

A roster filled to the brim with players – multiple All-Americans included – of high-scoring pedigree? Check.

A team one win away from capturing the national championship just a season ago and expected to contend again next May? Check.

Clearly, the Bruins’ talent, now with redshirt senior attacker Maddie Musselman back in the fold, cannot be denied. Having led UCLA in goals in every season she has appeared in, Musselman’s return not only bolsters the blue and gold’s offensive onslaught but also adds to the allure and chances of high-scoring matches.

A loss to USC in the championship last year definitely stings, but it only adds to the lore of this Los Angeles crosstown rivalry. The Trojans maintain relative mediocrity in other sports, slightly diminishing the allure of the battle of LA games. That’s not the case in women’s water polo – a rivalry in which your opponent is also among the best in the game merely raises the stakes.

For the casual fan and the water polo expert, these Bruins have no shortage of storylines and action to more than satisfy.

And best of all, home attendance is free.

I had never been to a gymnastics meet in my life before my freshman year at UCLA.

Like a millions of others across the world, I remembered seeing Katelyn Ohashi’s viral floor routine, and I knew UCLA gymnastics was supposed to be one of the better teams in the country. But that’s about all I knew.

I decided to pay a visit to Pauley Pavilion to watch the Bruins’ season opener in January 2020, where I walked in, much to my surprise, to a nearly packed house. What I saw – including a perfect 10 courtesy of Kyla Ross and a legendary floor rotation – amazed me.

But what shocked me the most was the atmosphere. There was more energy and excitement in Pauley Pavilion that day than I had felt at any UCLA men’s basketball game – and it wasn’t a fluke.

Last year was arguably UCLA gymnastics’ worst season in 15 years and the entire assembly of spectators was made up of three members of the media, and yet, the atmosphere still felt electric. So much so that millions of people flocked to the internet to watch then-junior Nia Dennis perform in front of an empty house.

With fans set to make their return when the Bruins’ season begins in January and UCLA’s adding one of the top freshman classes in program history, there is no question as to which team donning the blue and gold next year will provide must-see action every weekend.

Gymnastics is the only team on campus for which you can watch multiple athletes who competed in the Olympics this summer. It’s the team that garners more attention on social media than any team in Westwood – and the vast majority of collegiate teams across the nation. Oh, and it won a national championship three years ago and is trending in that direction once again.

The Bruins do things any ordinary student could never dream of doing, and they win a lot while they’re at it. In the context of sports, that is the definition of exciting.