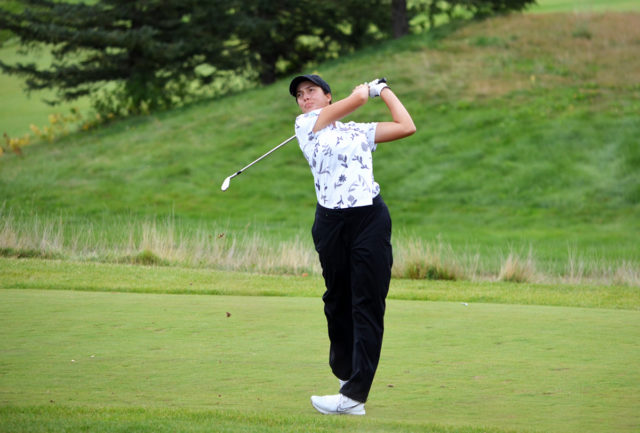 The Bruins were unable to build off their low-scoring opening round.

UCLA women’s golf finished 10th out of 12 teams at the ANNIKA Intercollegiate at The Royal Golf Club in Lake Elmo, Minnesota. After a one-under-par in round one, the Bruins found themselves in a tie for fourth but dropped six spots in the next two rounds, shooting a total of 18-over-par in a three-day span.

Coach Carrie Forsyth said the team failed to adapt to the changing conditions, especially with the wind and rain coming into play during the event.

“I think some of our players need to learn to flight the ball a little bit lower,” Forsyth said. “I don’t think we did a good job at that.”

Forsyth added that the course demands a lot in terms of ball striking, with not a lot of flat lies and greens that undulate a lot.

However, there were a lot of positives to take from the week, according to Forsyth, who said she felt good about some of her players’ performances, especially with two freshmen qualifying for the lineup in Caroline Canales and Zoe Campos.

“(The freshmen) both qualified, they earned their spot in the No. 1 and No. 2 positions,” Forsyth said. “They’re really good players. I think that bodes very well for us.”

With only two returning starters in junior Emma Spitz and senior Simar Singh, Campos and Canales both made their collegiate debuts.

Canales led the team with a score of 3-over-par, finishing in a tie for 25th place. While this was her first tournament in a college team format, Canales said the nerves didn’t affect her.

“I have had experience in prior tournaments,” Canales said. “I think all of us were feeling pretty nervous, but we created a good environment to get over those nerves.”

Spitz and redshirt sophomore Ty Akabane followed Canales, both scoring a 4-over-par and finishing in a tie for 28th place. Akabane made her first appearance since the 2019-2020 season after not playing at all last year.

Rounding out the lineup were Campos and Singh, shooting scores of 8-over-par and 20-over-par, respectively. Campos finished in a tie for 42nd, while Singh placed 58th out of 60 golfers.

While the team had some finishes in the top half of the tournament, Spitz said there is always a little room for improvement.

“I know I have some work to do on the greens with my putting,” Spitz said. “I’m (also) going through some small swing changes. … I need to be better and feel more confident with them.”

With the 10th place finish for the team, Forsyth, like Spitz, said the Bruins have many avenues in which they can get better.”

UCLA next tees it up at the Molly Collegiate Invitational in Seaside, California on Sept. 27.