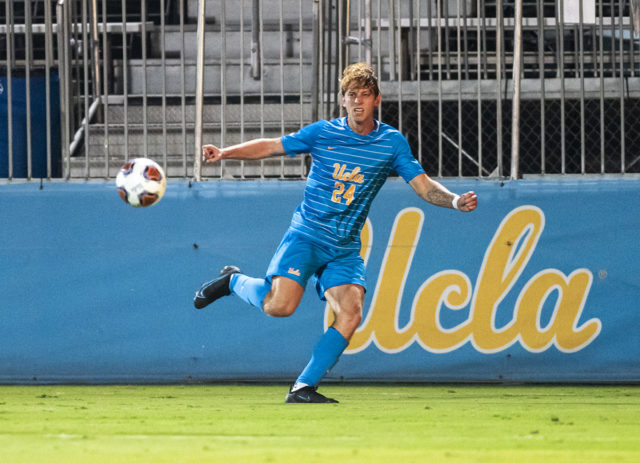 Two games into Pac-12 play, the Bruins have already matched their number of conference wins from last season.

UCLA men’s soccer (5-2, 2-0 Pac-12) beat California (2-4-1, 0-2) by a score of 2-1 on Sunday night at Wallis Annenberg Stadium. Redshirt freshman midfielder Tucker Lepley got the Bruins on the board with a left-footed strike in the 21st minute, followed by an outside-the-box shot from sophomore defender Tommy Silva in the 40th minute.

UCLA got on the board in the 21st minute when sophomore forward Grayson Doody beat his man down the right wing and delivered a cross into the box. Junior midfielder Riley Ferch let the ball go through his legs and Lepley was there to put it away.

Lepley said he credited his performance to the 1,106 people who attended the game.

“When they’re banging on the bleachers and making noise, you feel the atmosphere, you feel the beliefs,” Lepley said. “When people come out and support us, we just want to put on a show for them, and it means the world to us.”

Later in the first half, Silva got the ball outside the 18-yard box on his right foot and took a 20-yard strike that beat Cal goalkeeper Collin Travasos into the top right corner of the goal. The goal was Silva’s fourth of the season and was one of 16 shots for the Bruins compared to only four for the Golden Bears.

Coach Ryan Jorden said after the game that getting on the board first is always a major goal for the team to set the tone for the rest of the game.

“Anytime you can go ahead in a game, it puts you more in control,” Jorden said. “The first goal is always a big deal and extremely vital in terms of getting the result that you want.”

Right before halftime, Cal was able to tighten the gap with a goal from midfielder Shoei Honda. However, the Golden Bears weren’t able to equalize in the second half as they only had one shot in the frame, which was saved by senior goalkeeper Justin Garces.

Despite the win, Silva said there are still many areas to improve.

“I’m happy with the team’s performance, but there are a lot of things we can improve on,” Silva said. “I’m looking forward to going to training this week so we can improve and take that into the next game.”

With the win Sunday night, the Bruins are now three games above .500 and are 2-0 in Pac-12 play for the first time in eight years. UCLA has also won five of its last six games and is 3-1 in its current five game homestand.

After the win Sunday night, the Bruins now have five days off before they finish their homestand with a game against UC Riverside on Saturday.