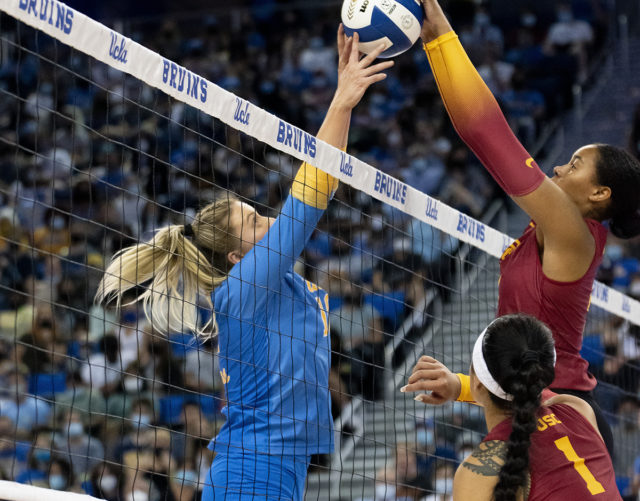 Bruin fans are finally back.

It was the first women’s volleyball match in Pauley Pavilion since 2019 to be packed with a crowd, which made its presence known through constant cheers, screams and music from the marching band.

Amidst an atmosphere that graduate student setter Shelby Martin said was electric, the Bruins prioritized focusing on their own side of the net.

“We did a good job of staying even keel,” said coach Michael Sealy. “Of course they were excited to have fans back, but we were not going to get so excited that we’ve got to play harder. Whatever our game is, that’s our game.”

UCLA never trailed in the opening set, roaring to an 9-2 start before holding off a late push from USC for a 25-21 victory. The second set followed a similar story, with the Bruins rattling off five straight points after being tied 6-6 en route to winning 25-20.

In the third set, however, UCLA gave up five service aces, committing five reception errors in that set alone.

“They came out and served really tough in the third set,” Sealy said. “We’ve got to just let that one go and kind of restart, and that was the main focus of just getting back on track (in the fourth set).”

After making adjustments to the lineup order, the Bruins rattled off eight straight points to take an 11-5 lead in the fourth frame and took the set 25-14.

“(In the fourth set), we were talking more during serve receive, calling it even before the ball got to us, and on defense we made adjustments of staying deep,” outside hitter/opposite Charitie Luper said. “They were hitting high hands, and as the blockers, we just made adjustments of taking away certain spots of the court.”

UCLA trotted out the same opening lineup as they did in their previous match against Milwaukee, which includes two freshmen playing their first home match – Luper and middle blocker Francesca Alupei. Luper paced the team with 19 kills on a .410 hitting percentage, while Alupei chipped in six kills and a team-high seven blocks.

“You couldn’t even tell they were freshmen,” Martin said. “When I was a freshman playing, I know I was constantly nervous and just wanting to be perfect, but they’re settling in so well. They have such a presence on the court, and they’re doing really good.”

The Bruins had nine more kills than the Trojans while outhitting them .333 to .179. Graduate student outside hitter/opposite Mac May, the team’s season leader in kills, added 13 kills and an ace. Martin contributed 45 assists, while four players – May, Martin, senior defensive specialist/libero Zoe Fleck and senior outside hitter/opposite élan McCall – had double-digit digs as UCLA out-dug USC 62-46.

Luper said playing in front of the UCLA crowd was a particularly special moment.

“This is literally a dream of mine, and it finally came true,” Luper said. “My teammates had my back the entire way, and I just felt really relaxed and played out there with a lot of confidence.”