By Jeremy Chen and Tanmay Shankar 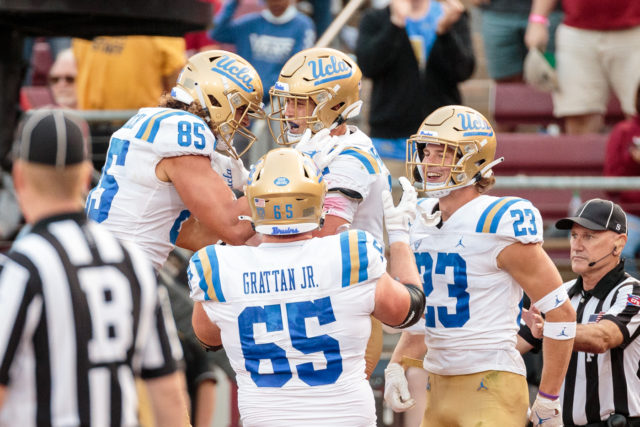 Correction: The original version of this gallery incorrectly stated that Dorian Thompson-Robinson had 29 rushing yards over 18 attempts. In fact, he had 30 rushing yards on 16 attempts.

Stanford players rush onto the field before kickoff. Though the Bruins ended an 11-year losing streak against the Cardinal when the teams met at the Stanford Stadium in 2019, they lost during their season finale at the Rose Bowl in 2020.

Redshirt junior wide receiver Kyle Philips gains 59 yards on a punt return, setting up the Bruins for a scoring play on their first possession of the game.

Junior running back Zach Charbonnet fends off a Stanford defender.

The Bruins celebrate after a touchdown by Thompson-Robinson in the final seconds of the first half.

UCLA fans cheer the Bruins on from the stands.

Philips celebrates after he soars into the end zone for a 75-yard touchdown.

Thompson-Robinson lies on the sideline in pain after a tackle by Gilman. Redshirt freshman quarterback Ethan Garbers took over a single play while Thompson-Robinson recovered before the final scoring play of the game.

The Bruins celebrate their final touchdown of the day, bringing the score to 35-24 and sealing their victory over the Cardinal.

Jackson sacks McKee in Stanford’s final drive of the game.

Tanmay is a senior staff photographer and member of the editorial board. He was previously an assistant Photo editor covering the sports beat.