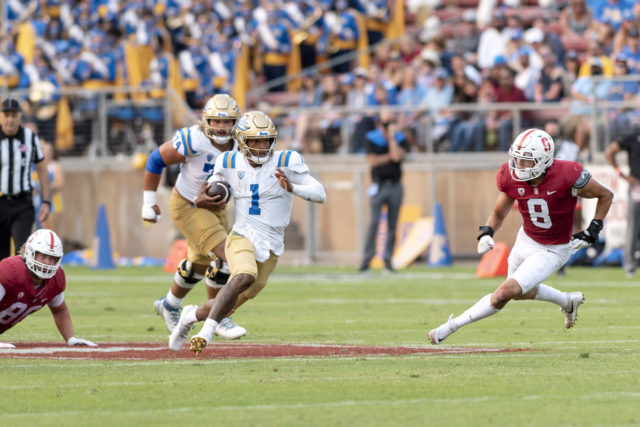 STANFORD — Seven days ago, Fresno State quarterback Jake Haener was limping on his final drive yet led his team down the field for a go-ahead touchdown to beat the Bruins.

But a week later, in their Pac-12 opener on the road, it was senior quarterback Dorian Thompson-Robinson, hurt and clutching his shoulder, who led the Bruins on a drive lasting nearly seven minutes to seal the game against the Cardinal.

No. 24 UCLA football (3-1, 1-0 Pac-12) defeated Stanford (2-2, 0-1) by a score of 35-24 on Saturday at Stanford Stadium. On a drive beginning with 9:10 to play in the fourth quarter, Thompson-Robinson and the Bruins marched 75 yards down the field, converting on three separate third-down attempts that culminated in a five-yard touchdown pass to redshirt junior wide receiver Kyle Philips. That score was one of four total touchdowns for the signal-caller.

“The one thing that I don’t think gets mentioned enough with Dorian is how tough he is and he’s been tough from the get-go,” said coach Chip Kelly. “It’s an underrated quality for a quarterback to be a tough guy who will stand in there and play, and I think that was on display today.”

Thompson-Robinson was seen grabbing his shoulder and had been stretched out by trainers in the first half, but Kelly didn’t elaborate on the signal-caller’s status postgame and the quarterback did not speak to the media.

UCLA’s drive chewed away nearly half of the fourth quarter, giving Stanford just over two minutes to score at least 11 points. Unlike the game against the Bulldogs, the Bruin defense held firm, allowing the Cardinal to penetrate their territory but forcing the home squad to settle for a 54-yard field goal attempt that missed with four seconds to go.

In its game last year against Stanford, UCLA surrendered a 14-point lead with 5:39 left in regulation. With the score tied, the game went to double overtime, in which the Bruins lost by a final score of 48-47.

On UCLA’s penultimate drive, the Bruins rushed 11 times compared to two plays in the air. For the game, Thompson-Robinson threw 29 passes, while junior running back Zach Charbonnet and redshirt senior running back Brittain Brown combined for 31 carries and 184 yards. Thompson-Robinson contributed his own share of rushing yards with 30 and tacked on two touchdowns off read-option plays with Charbonnet.

The Bruin rushing attack was stifled against the Bulldogs last week, but against the Cardinal, UCLA’s run game was closer to its rushing totals in wins over Hawai’i and LSU.

UCLA largely ran its offense with the running backs on the ground, but Thompson-Robinson completed 18 of his 29 pass attempts, one of those completions being a 75-yard strike to Philips in between two Stanford defenders early in the fourth quarter.

“(Thompson-Robinson) was taking hits, and it was wearing on him a little bit, but he’s a tough guy, and you know it will never hold him down,” Philips said. “The game was on the line, and he came back and made a huge play. We’re all just really proud of him.”

Philips led Bruin receivers with five receptions for 120 yards, nearly half of UCLA’s total yards through the air. On top of a 59-yard punt return in the first half, he was the recipient of both touchdown passes from Thompson-Robinson.

“I just told (Thompson-Robinson) that I love him,” Philips said. “(He) really put the team first even though he was going through a whole lot.”

That touchdown put UCLA up by seven despite heading into the locker room with a 14-point lead. Stanford managed one first down and crossed midfield once in the opening half as its offense was held to 126 total yards.

The Bruin defense allowed one more field goal for the rest of the game, giving the team its second win over the Cardinal in its last 14 tries.

After UCLA scored its fourth-quarter go-ahead touchdown, its secondary limited McKee to 53 passing yards in the final 13 minutes.

“Bruins finish,” Knight said. “It just took guts. This game got down to a fourth-quarter game. …We knew Stanford wasn’t just going to roll over.”