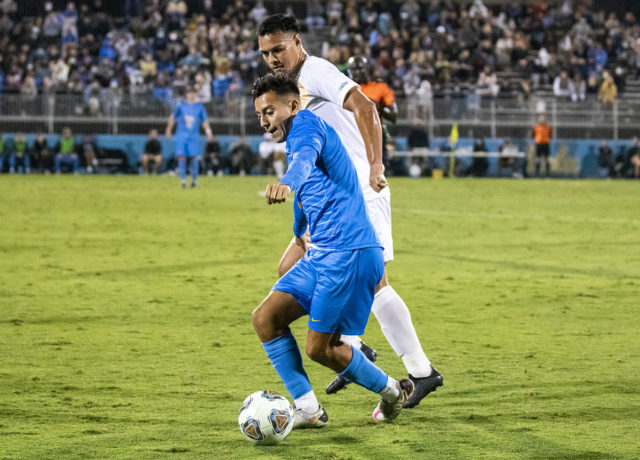 A last-minute penalty kick won the Bruins their third game in a row.

Senior forward Kevin Diaz broke the 1-1 tie in the 86th minute to help UCLA men’s soccer (6-2, 2-0 Pac-12) defeat UC Riverside (5-3) by a score of 2-1 on Saturday night at Wallis Annenberg Stadium. The goal was Diaz’s second of the season, with the first one occurring during the Bruins’ victory over Stanford.

UCLA’s offense started early, with junior midfielder Riley Ferch getting a shot on goal within the first minute of the game. The Bruins had three more shots on goal before redshirt freshman midfielder Tucker Lepley found the back of the net in the 17th minute.

While UCLA earned nine shots on goal in the first half, it also committed five fouls. In the 27th minute, a foul on freshman defender Pietro Grassi allowed the Highlanders to tie up the score at one apiece.

Diaz said the five early fouls in the game disrupted the team’s momentum and gave Riverside more chances to score.

“Our whole game plan, especially under (coach) Ryan Jorden, is momentum and tiring out (the opponent’s) defense,” Diaz said. “Having a lot of fouls, it gave the opposition a lot of chances to recover.”

By the end of the first half, the Bruins had recorded seven more shots than the Highlanders. However, Jorden said his team still needs to work on following through and making sure more of those shots make it into the net.

“Our challenge is that we should have scored probably three goals in the first fifteen minutes, and if we do that, we end the game early,” Jorden said. “Our soccer in the first half-hour was fantastic. We put ourselves in a lot of good movements and moments, but again, you just got to score the goals.”

The Bruins continued to make opportunities for themselves in the second half, receiving three corner kicks within the first 10 minutes. Riverside responded by recording six shots in addition to its seven fouls in the second half.

Four minutes away from having to play its second overtime game of the year, Diaz’s late goal secured the third victory in a row for UCLA. Lepley said that the winning momentum will be very important for the team moving forward.

“It just creates this belief, every day at training, (that) we’re excited to be with the boys. We’re excited to support each other on the field,” Lepley said. “There’s no better feeling than winning – when you win, everything’s fine. It doesn’t matter how we get it done as long as we win.”