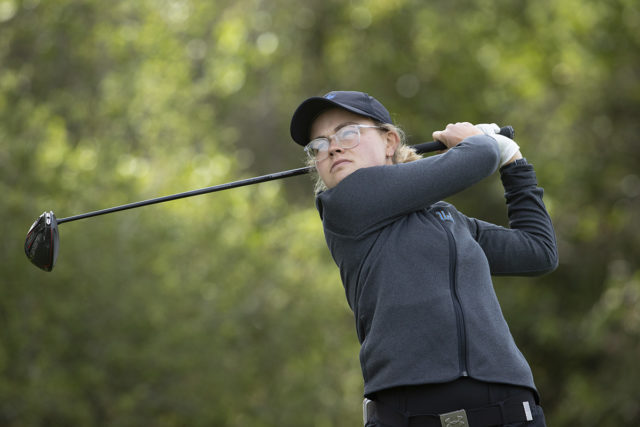 Junior Annabel Wilson will be making her season debut when UCLA women's golf heads to Seaside, California, to compete in The Molly Collegiate Invitational. (Courtesy of UCLA Athletics)

The Bruins are back on the road for another event.

UCLA women’s golf is headed to Seaside, California, for The Molly Collegiate Invitational. The tournament will be played at Bayonet and Black Horse with 36 holes played Monday and 18 holes played Tuesday. It will be in a field of 15 teams, with four teams hailing from the Pac-12.

The Bruins will have a chance to improve from their 10th place finish out of 12 teams at the ANNIKA Intercollegiate.

Coach Carrie Forsyth said each of her players had different things to work on.

“We really just tried to have each person focus on what they were struggling with,” Forsyth said. “For some of our girls, it was ball striking. For some of them, it was more short game and putting.”

Senior Simar Singh – who shot a 20-over par and finished in a tie for 58th place at the ANNIKA Intercollegiate – said she has plenty of room to improve.

“Last week in Minnesota definitely was not my best performance,” Singh said. “It was a little disappointing, but it was the first event of the season. … It’s been mostly just cleaning up my long game because at the tournament that really hurt me.”

This week, UCLA is coming out with a different lineup. While freshman Caroline Canales and junior Emma Spitz had the highest scores on the team at the last event, they both did not qualify for the starting five this week.

Forsyth said since no Bruin finished in the top 20 at the last event, everybody had to re-qualify for a spot in a 54-hole qualifier.

Wilson said while this is her first start of the season, she has played a lot in the offseason. However, Wilson added that the course difference could be a factor, as she hails from Northern Ireland, where she said it is predominately links-style golf.

“(The) good thing about golf is we play all year round, so I think you can say that the change of style of golf course certainly plays an aspect,” Wilson said. “I’ve had lots of links play over the summer, and I’ve come here, and obviously climate is different, and courses are different. I’ve been here for three weeks and have adjusted back nicely.”

“This will be her first college tournament,” Forsyth said. “(She feels) excited and ready to go.”

Forsyth said the Bayonet and Black Horse courses present many challenges, including a lot of trees and narrow fairways. She also added that the greens are very difficult to read, so putting will be a major factor.

In addition, Forsyth said stamina will be very important considering the circumstances of the tournament.

“We’re playing 36 on Monday, so that alone poses some challenges, just being out there all day long,” Forsyth said.

Singh added that patience will be key for the Bruins heading into their second tournament of the year.

“If we just stay patient and kind of really focus on our course management, we are going to do well – just keeping ourselves in a good headspace,” Singh said.