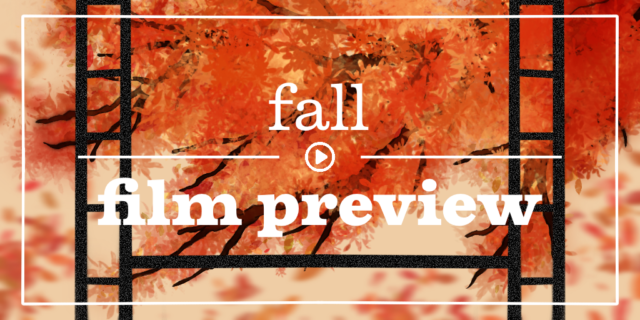 As the autumn wind breezes in, upcoming blockbusters are heating up the cinema screens.

Summer sun is being traded for the crisp, cool fall, but this season’s film lineup is sure to keep fun and warmth in the air. From new action comedies to adaptations of classic science fiction novels, viewers have a wide list of entertainment options to watch and keep them cozy on chilly days.

Read on for the Daily Bruin’s top film picks for the golden season.

The spice will flow when Denis Villeneuve’s next blockbuster hits theaters.

Releasing in select theaters and HBO Max on Oct. 22, “Dune” is the newest film version of Frank Herbert’s acclaimed science fiction series. The intergalactic saga was last adapted to film in 1984, but Villeneuve’s ambitious undertaking of the classic novel is set to spark renewed interest in the story.

The film follows Paul Atreides (Timothée Chalamet), the son of a noble family, as he sets out to defend his planet and the universe’s most powerful resource. With a robust cast including Zendaya and Oscar Isaac, as well as a score from accomplished composer Hans Zimmer, “Dune” is expected to kick-start a journey – and a new franchise. With his notable execution of past science fiction films such as “Arrival,” Villeneuve’s “Dune” looks to be just as immersive and visually stunning, based on the trailer alone.

Whether seen on the living room television or in theaters, “Dune” is a journey of astronomical proportions audiences won’t want to miss.

Soulful narratives and eccentric characters will display a nostalgic side of France in Wes Anderson’s “The French Dispatch.”

The anthology film will hit theaters Oct. 22 and feature three original stories structured around Arthur Howitzer Jr. (Bill Murray), an American journalist who creates the “French Dispatch” newspaper. While the comedy-drama seems to feature Anderson’s distinguishable visual styles such as symmetrical layouts and whimsical color palettes, its anthology format introduces a refreshing narrative structure to his list of credits.

Based on real-life individuals from The New Yorker magazine and historical events such as the May ’68 protests, the ensemble cast plays roles ranging from copy editor Alumna (Elisabeth Moss) and writer J.K.L. Berensen (Tilda Swinton) to student revolutionary Zeffirelli (Timothée Chalamet) and art dealer Julien Cadazo (Adrien Brody). The range of talent coupled with Anderson’s visual storytelling will provide a vibrant reflection of journalism and overlooked historical figures.

Literary enthusiasts and avid moviegoers alike are sure to find a story to resonate with in “The French Dispatch.”

What happens in Soho doesn’t always stay in Soho.

From the director behind “Baby Driver” and “Scott Pilgrim vs. the World,” “Last Night in Soho” is Edgar Wright’s fearsome contribution to this fall’s film slate. Premiering Oct. 29, the psychological thriller-horror features breakout star Anya Taylor-Joy as Sandie, an aspiring singer from the 1960s, and Thomasin McKenzie as an aspiring fashion designer from the present who can access the 1960s through her dreams. But as McKenzie becomes increasingly drawn into Sandie’s life, she finds her dreams becoming more sinister than they seem.

Wright’s signature energetic, upbeat style is found all throughout the film’s trailer, with atmospheric visuals and dynamism that ramp up as the plot escalates. While Wright has not fully delved into horror previously, it will be interesting to see how the director, who has a penchant for breaking genre conventions, will add his own spin to the genre.

Out just in time for Halloween weekend, “Last Night in Soho” is bound to be a thrilling flick to set the mood.

A living spirit haunts the holiday halls in “Spencer.”

Pablo Larraín, director of “Jackie,” visualizes the psyche of yet another prominent and tragic female figure in his latest film. Set to release Nov. 5, the movie is a character study of Princess Diana (Kristen Stewart), born Diana Spencer, following her over the Christmas of 1991 as she wrestles with her marriage to Prince Charles and eventually decides to to leave him.

Promising the exquisite visuals and meticulous imagery that mark Larraín’s style, the film is yet another attempt to tell the story of Princess Diana. But unlike its companions that focus on the politics surrounding her life at the palace, Larraín’s version seems to be more concerned with Diana’s inner turmoil and tumultuous sense of self.

This gaze into Spencer’s life will linger in the minds of moviegoers far after the winter chills are gone.

Releasing Nov. 12, “Red Notice” will present an adventure with comedic twists around every corner. The film will follow FBI profiler John Hartley (Dwayne Johnson), who initially sets out to capture art thief Sarah Black (Gal Gadot) but finds himself in an unexpected turn of events alongside Black and con man Nolan Booth (Ryan Reynolds). The small yet mighty cast depicts a close-knit and dynamic chemistry on screen, promising to offer an intimate adventure story.

“Red Notice” was the first film shared during Netflix’s Tudum, an online fan event that presented trailers, first-look clips and teasers to garner excitement among audiences this fall. Previews for the film, including an exclusive clip that kicked off the three-hour event, set the scene for Netflix’s original slate of content in the coming months.

With a megastar cast, exciting narrative and eager audience, “Red Notice” will be the comedic heist audiences can fall back on this season.