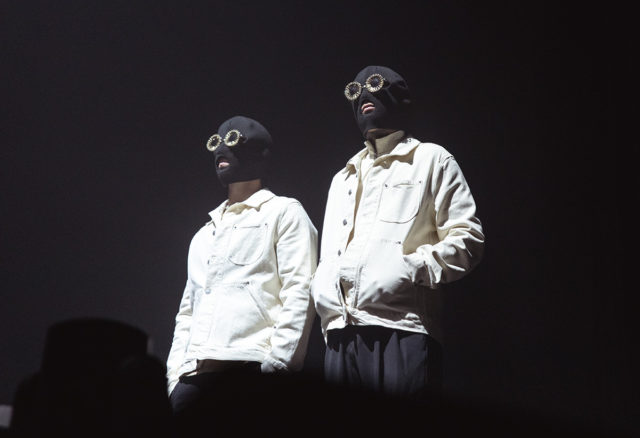 Duo Tyler Joseph and Josh Dun of Twenty One Pilots stand before the crowd, wearing identical outfits and masks before the lively show at the Forum Saturday night. (Ashley Kenney/Photo editor)

Twenty One Pilots hasn’t just taken off – it’s here to take over.

The pop-rock band continued its “Takeover Tour” at The Forum on Saturday night, filling the venue with explosive energy. Performing mostly songs from their sixth studio album “Scaled And Icy” combined with recognizable hits such as “Stressed Out,” “Heathens” and “Ride” from previous albums, the duo presented a variety-filled setlist for its first tour since the COVID-19 pandemic.

As the show started with a video montage of past concerts, lead vocalist Tyler Joseph and drummer Josh Dun emerged from opposite sides of the stage wearing identical white jackets, black pants and black ski masks, setting a mysterious tone until the masks were eventually removed. Throughout the concert, the two chose simple outfits – Joseph alternated between a robe and a plain white shirt whereas Dun performed shirtless for a portion of the show.

While their outfits were unassuming, they made up for it with their high-energy choreography and attention-grabbing visual effects. On multiple occasions, Joseph performed flips while onstage, creating a visually enticing experience. Vibrant lights, steam, pyrotechnics and colorful videos raised the energy in the venue to a maximum and kept the audience on its toes at all times. The excitement in the air was palpable as confetti rained down at the end of the show.

From the very beginning, all the way to the last song, Joseph effectively maintained high levels of audience interaction, keeping viewers engaged throughout the show. From involving the crowd through clapping to dividing the room into two and asking each half to sing a different section of a song, he ensured the audience was actively and continually participating in the experience. Joseph even threw in some lighthearted jabs at the audience’s expense, preceding the song “Heathens” by joking, “This next song is about a group of people who kind of creep me out – I wrote it about you, honestly.”

Physical contact was a particularly standout point of the show and demonstrated the trust and comfort between the duo and the audience. At one point, Dun stepped onto a raised platform and played the drums while the platform was held up by audience members in the floor section. On the other hand, Joseph crowd-surfed through the front part of the audience.

The band also did not fail to recognize the significance of being on stage performing an album that was created remotely during the height of the COVID-19 pandemic. In a transition between two songs, Joseph addressed the audience, speaking over some slow piano chords that set the serious tone.

“There was a moment where I seriously thought that we would never get back here on this stage,” he said. “And it’s only going through a valley like that, that this mountaintop feels so much better.”

The emotional dialogue punctuated the atmosphere in a natural manner that was well-received by the cheering crowd.

Toward the latter half of the concert, the vivacious energy suddenly toned down as the band lit a small fire onstage and gathered around it as Joseph exclaimed, “Welcome to the campfire!” This interlude consisted of several slower-paced songs, such as a cover of “I Can See Clearly Now” by Johnny Nash, accompanied by Joseph on the ukulele, serving as an interesting change of pace before the music picked up again, returning to the rapid, strobe-light-heavy songs that had defined most of the performance. Although the campfire segment was unexpected, it presented itself as a relaxing break rather than a sudden interjection.

Sonically speaking, the band was overall able to sound both professional and skilled live as compared to its studio recordings. While the vocals were lacking in some parts and there were some dodged notes, the delivery was quite true to the original recordings. Particularly, Joseph yelled some lines instead of singing them, but it was not necessarily a negative aspect – the change allowed for the audience to scream along as well and contributed to raising the energy in the air.

As the band wrapped up the night with “Trees,” multicolored lights and fog machines brought the crowd to its feet as they jumped together in the midst of falling confetti. The finale effectively concluded the lively concert and brought the audience to a climax before the duo bowed and bid the crowd farewell.

For Twenty One Pilots, the fiery night was anything but icy.