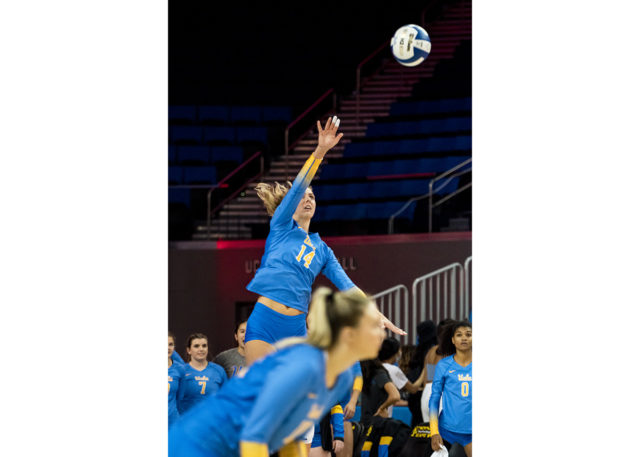 No. 15 UCLA women's volleyball split its matches in the state of Washington over the weekend. Graduate student outside/opposite hitter Mac May finished with 39 kills in the win against Washington State on Sunday – the highest kill total by a Bruin in 30 years. (Jeremy Chen/Daily Bruin)

The Bruins took their first conference loss in Seattle.

In their contest against the Huskies, the Bruins won the first two sets but were reverse-swept with 15-12 as the final set score. Both teams were missing starters at outside hitter, as blue and gold freshman Charitie Luper and purple and gold Madi Endsley did not participate in the match.

“I get really excited when people come in and they do their job,” said graduate student outside/opposite hitter Mac May. “They work really hard. … It’s exciting to see more faces get on the court and share some time with other players.”

After winning the first two sets, the Bruins recorded a negative hitting percentage of -0.077 in the third, with seven kills and nine hitting errors. In the third set, UCLA lost 25-13 – the largest loss margin in the match.

The team regained more points in the following sets, closing the score margin in each frame to less than three points.

In the fifth set against Washington, graduate student setter Shelby Martin was substituted out for one rotation, leaving the team without their setter.

“(The substitution was) just so we can have a bigger block and they can’t take advantage of my size,” Martin said.

Despite the tactical substitution, the Bruins lost the final set 15-12, ending with a kill and an ace from Washington.

UCLA stayed up north to play Washington State in Pullman. McCall continued to play outside hitter in lieu of Luper’s absence, while the right side saw various players substitute in, including senior defensive specialist/libero Kelli Barry.

McCall lead the match with five kills after the first set against the Cougars, but May notched a game-high 39 kills, the highest number of kills any Bruin has swung in a single match in 30 years.

During the fifth set, two challenges were successful – one for each team. Coach Michael Sealy’s successful challenge brought his team from being down 14-11 to 13-12.

Following the successful challenge, May scored two kills, sending the match into overtime.

After the tie, Washington State had four match-point opportunities. UCLA’s first match point resulted in the final win at 20-18.

“This game (Sunday) was, without a doubt, a team win because every single person had a responsibility,” Martin said. “Whether they were contributing, either by cheering or by coming in and performing, we could not have won today without every single person on our team.”

Lin was an Assistant Video Producer and a Sports contributor on the women's volleyball beat, and is a second-year psychobiology student. She was previously a 2019-2020 video contributor.