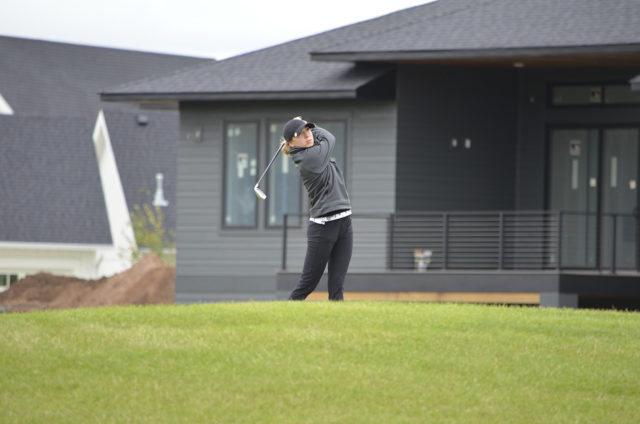 Junior Emma Spitz will return to UCLA women's golf's starting lineup at the Blessing Collegiate Invitational on Monday after not competing in the Bruins' most recent tournament. Spitz said she spent the break working on her long game and putting. (Courtesy of UCLA Athletics)

The Bruins are headed back east.

This tournament, however, will be different because of its adjusted format, coach Carrie Forsyth said. Typically, players are paired with players from other schools, but that will not be the case for this event.

“It’s an interesting format,” Forsyth said. “We’re playing together in a fivesome so that’s really unusual.”

It will also be a short turnaround this week for UCLA, as the Bruins have consecutive tournaments in back-to-back weeks. Redshirt sophomore Ty Akabane said the short week of preparation doesn’t change her approach to practice.

“With the quick turnaround, I’m pretty much still doing the same things, working on my short game, my ball striking,” Akabane said. “We’ve been traveling a lot, just on the road … so I think rest has been just maximizing my sleep and just trying to stay organized with school starting.”

Junior Emma Spitz, who did not play at the Molly Collegiate Invitational, said she spent her extended break fine-tuning specific parts of her game.

“I focused a lot on my putting and my long game,” Spitz said. “I had a few mistakes that I needed to fix and I worked on it with my coach.”

The team will be making some lineup changes this week, Forsyth said. While freshman Caroline Canales and Spitz did not play at the Molly Collegiate Invitational, they will be back in the starting lineup Monday, replacing senior Simar Singh and junior Annabel Wilson.

Akabane, freshman Zoe Campos and redshirt freshman Alessia Nobilio will be in the lineup again this week to round out the Bruins’ starting five.

Forsyth said the Blessings Golf Club is a very difficult course, adding that the course should be seen as a par 75 rather than a par 72.

“The Blessings is one of the most difficult golf courses I’ve ever set foot on,” Forsyth said. “We’ve played the national championship on it a few years. It’s a difficult course.”

She also said the Blessings requires quality ball striking, as the course is very punishing. However, Forsyth said she feels good about the team’s ball striking going into the week.

Like Forsyth, Spitz said this will be one of the hardest courses the Bruins play on all year.

“You really need to know where to hit the ball and have good long game, but also good short game,” Spitz said. “It’s going to test every part of our games.”

In addition the difficulty of the course, Akabane said there will be more challenges for UCLA to conquer.

“Some courses you can be more aggressive and go at the pin all the time, but (this course), it’s (about) hitting to the right quadrant of the green,” Akabane said. “I think it’s a physical challenge too with the course, like walking it. There will be a lot of other external pressures too (because) this tournament is televised.”

The Bruins tee off Monday at the Blessings Golf Club at 9 a.m., with televised coverage on the Golf Channel beginning at 1:30 p.m.