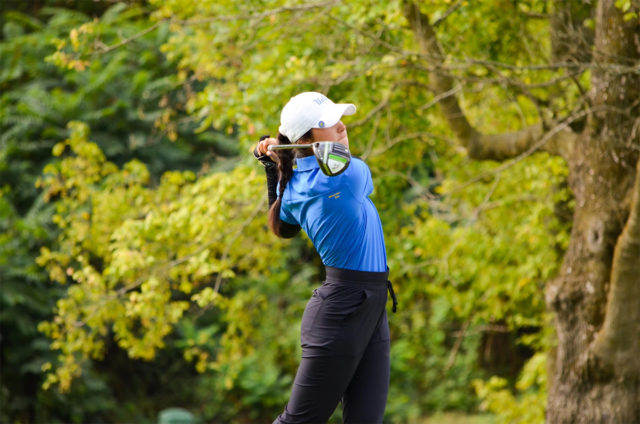 For the second straight tournament, UCLA women's golf earned a second-place finish and was led by redshirt freshman Alessia Nobilio, who tied for second at the event with an even-par 216. (Courtesy of Alicia Um Holmes)

The Bruins finished as the runner-up for the second straight tournament.

UCLA women’s golf placed second out of 10 teams at the Blessings Collegiate Invitational, which took place from Monday to Wednesday in Fayetteville, Arkansas. UCLA finished 19 strokes behind the winner, Arkansas, but seven strokes ahead of third place team Texas Tech.

Coach Carrie Forsyth said the team had a good week with three players finishing in the top 15. She added that Arkansas’ performance could be attributed to home-course advantage.

“There’s a lot of home-course advantage and knowledge on this golf course,” Forsyth said. “Not surprised that we didn’t beat them, but I can’t say I’m unhappy about how we played.”

For the second week in a row, redshirt freshman Alessia Nobilio led UCLA in scoring, finishing in a tie for second place. She carded an even-par total over the three days.

Nobilio said she attributed her play to her confidence the previous week and the presence of her teammates, adding that she found success with her long game at the invitational.

“My game was really solid. Plus I was playing with my teammates, so I had a lot of support on the course, which was nice,” Nobilio said. “I hit a lot of fairways and greens, especially on the first two days.”

Following Nobilio on the Bruins’ leaderboard were redshirt sophomore Ty Akabane and junior Emma Spitz. Akabane finished one shot higher than Nobilio, landing a tie for fourth place, while Spitz finished in a tie for 11th place.

During the final round Wednesday, Akabane started 3-over-par on the first four holes, but with a birdie on the fifth hole and an eagle right after, she ultimately closed out the final round of the tournament with a 1-under 71.

“(Wednesday) I had a little bit of a rough start, but I stayed focused on the next shot and just let putts fall and good shots happen,” Akabane said. “Making that eagle definitely gave me some positive momentum.”

Rounding out the lineup were freshmen Zoe Campos and Caroline Canales. Campos finished with a total of 10-over-par, good for a tie for 23rd, while Canales carded a total of 19-over-par, finishing in a tie for 41st.

Forsyth said every player’s strength in the lineup was ball striking, adding that ball striking is especially important for such a difficult course like the Blessings – a very punishing golf course for bad shots.

“You can’t hit really bad shots because if you do, you’re going to get severely punished,” Forsyth said. “If you look at the scorecards and you see a triple or a quadruple bogey, that’s somebody who hit a really bad shot. … It’s so hard to recover from positions that you can end up in out here.”

Going forward, Forsyth said the Bruins will continue to switch up their lineup weekly, adding that there will be qualifying rounds every week to determine the final spot in the lineup for those who are not exempt.

“We’re going to be changing out the roster a lot this season,” Forsyth said. “By the end, we’re really going to know who our top five are, and those people are going to have earned it – and so I’m excited about that.”

The Bruins have just over a week of rest before heading north for the Stanford Intercollegiate.