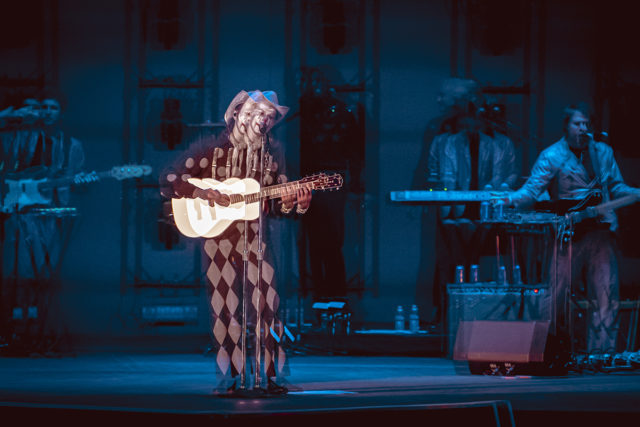 Dressed as his suave alter ego Chip Chrome, Jesse Rutherford of The Neighbourhood performed at the Hollywood Bowl on Saturday night, and later reemerged as himself for the second half of the night. (Kanishka Mehra/Daily Bruin senior staff)

The Neighbourhood had a ball at the bowl.

Indie rock band The Neighbourhood made the ground quake at the iconic Hollywood Bowl on Saturday, hosting a thrilling concert that spanned nearly a decade’s worth of discography. Featuring rambunctious theatrics and magnetic showmanship, the show was able to overcome an unfortunately hefty set list and underwhelming stage setup, setting the venue ablaze with the group’s performance.

The Neighbourhood’s ability to make a gargantuan venue feel a bit less like an endless void is certainly worthy of praise. While the lackluster opening acts only used a tiny portion of the stage, the band did all it could to maximize the space granted to it, parading around the stage on a platform shaped like an upside down house – the band’s signature logo.

Coupled with the authoritative command of the amphitheater were dazzling theatricals, including fires that erupted during frontman Jesse Rutherford’s guitar solos and strobe lights that pulsed desperately with the beat, igniting life into the stadium. While the band was only able to physically fill up less than half the stage with its setup – looking a bit outmatched by the cavernous venue – the large grid of spotlights on the back of the stage illuminated the remaining space.

From visualizing a soft orange dawn for “Tobacco Sunburst” to beaming a bright shade of crimson for “Cherry Flavoured,” the spotlights were aptly choreographed for the most part. However, there were a few lighting pitfalls, including an out-of-character, patriotic American flag during “Here We Go Again” and the questionable choice to aim two blinding spotlights directly at the crowd during “Lost in Translation,” giving the audience an unexpected chance to roleplay as deer in headlights.

And despite a nearly two-dozen song lineup that would have even the most devoted fans checking their watches, it was at least unequivocally clear the band had placed meticulous thought into the set list. The concert was separated into two distinct halves, the former of which exclusively featured songs from the band’s most recent album, “Chip Chrome & The Mono-Tones,” while the latter was a medley of tracks from its previous three studio albums.

These halves were so compartmentalized, in fact, that it was almost as if there were two entirely different headliners for the night, contributing to an overall sense of incongruity in the performance. Rutherford first graced the stage as his alter ego, the aloof-yet-suave Chip Chrome, with his face painted silver while flaunting a sleek patterned suit reminiscent of a ’70s era glam-rock look. But in the blink of an eye, the enigmatic frontman appeared during the second part of the show in a loosely buttoned top and cuffed jeans, a grungier outfit that harkened back to the band’s alternative rock roots.

The dichotomy between the two portions of the concert was unfortunately too rigidly enforced, with Rutherford’s Chip Chrome so cavalier that he almost felt frosty, as he neglected to directly address the audience once in the entire first half of the show. Conversely, Rutherford as himself was endearingly guileless, spending several minutes expressing his disbelief at the sheer size of the crowd as well as effusively thanking fans for their support.

Yet even though the sudden mood change was unexpected – and perhaps even unwelcome – Rutherford’s versatility as a frontman was mesmerizing as he sultrily serenaded in “Daddy Issues” and sinisterly cackled in “Devil’s Advocate.” But his showmanship could only save so much, as the show inevitably dragged on in its latter portion due to the bulky set list. By the final third of the performance, songs began to meld together as theatrics became redundant, with Rutherford resorting to aerial acrobatics – albeit Cirque du Soleil-worthy stunts – to keep the audience engaged.

At least the vocals themselves were consistent with what appears on the band’s records, and The Neighbourhood was able to seamlessly transition from languidly lazy tracks like “Sadderdaze” to thumping, vivacious songs like “Sweater Weather.” Concert attendees sang along to each song, eagerly partaking in Rutherford’s occasional call-and-response and swinging their phone flashlights in time with the beat.

The night ended fittingly with “Stuck with Me,” a thoughtful tribute to the group’s fans and one that hammered home as Rutherford jabbed his finger at the crowd while shouting, “You are stuck with me.” Concluding the song with dramatic bursts of steam and the bowl itself lit in rainbow, the show ended a bit abruptly as the band dashed off the stage without even taking a bow.

But with the incandescent performance it had just put on, the night was illuminated even as the curtain closed.