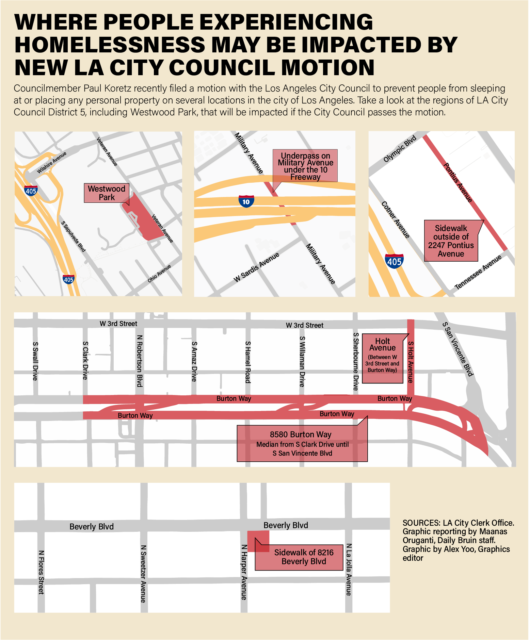 A Los Angeles City Council motion calling for a homeless encampment sweep in Westwood Park and five other locations throughout West Los Angeles was filed Tuesday.

Koretz, who represents Westwood and surrounding areas, said he filed the motion to address emergency calls relating to fires, violence and drug use at the respective locations. Koretz added that his motion followed weeks of service providers, such as the Los Angeles Homeless Services Authority, conducting outreach at these locations.

Koretz also said that his motion would give individuals experiencing homelessness a deadline to either accept city outreach services or leave the area. Individuals refusing to accept services or relocate past the deadline may be evicted, according to the motion.

Jacob Wasserman, a member of the homelessness and community health committee of the North Westwood Neighborhood Council, said that Koretz’s motion was one of several similar motions filed to enforce the July city ordinance criminalizing homelessness. These previous motions used similar language to link enforcement of the ordinance to public health and safety, he added.

Gabriel Durkin-White, a UCLA law student, said he believes this motion aims to criminalize homelessness in Westwood and around LA. Durkin-White is a member of Street Watch Los Angeles, an organization that focuses on raising awareness of issues surrounding homelessness, and added that he believes the motion will pass at the city council but will not result in permanent housing solutions for Westwood Park’s residents experiencing homelessness.

As a Street Watch LA volunteer, Durkin-White said he regularly visited Westwood Park for years but failed to see the needs of individuals experiencing homelessness met, including showers and working restrooms.

“We just don’t support sweeps,” Durkin-White said. “There’s no amount of services that would make it OK to send cops to throw people’s stuff away.”

Koretz said community members have been supportive of his outreach efforts, and his office will continue them prior to evicting individuals at Westwood Park.

“We are continuing to have the non-profits work with our unhoused offering services,” Koretz said in an emailed statement. “My office remains committed to serving our unhoused neighbors.”

Oruganti is a News senior staffer. He was also the 2020-2021 Enterprise editor and a News staff writer in the City & Crime and Science & Health beats 2020. He is also a fourth-year cognitive science student at UCLA.