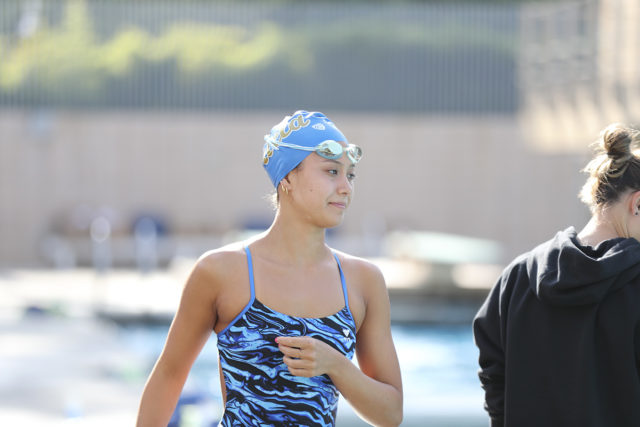 The Bruins landed on the podium in their first official meet of the season.

UCLA swim and dive placed third with 670 points at the Fresno State Invitational on Friday and Saturday, with 15 individuals earning top-10 finishes. The blue and gold finished only 9.5 points behind second-place San Diego State but 811.5 points back from first-place California.

Competing without divers at the six-team invitational, coach Jordan Wolfrum – now in her third season with the Bruins – said she does not place much stock in the Bruins’ finish this early in the season.

“From a strategic standpoint, by not taking divers to the meet, we lost about 150 points right off the bat to San Diego State,” Wolfrum said. “We out-swam that team, but certainly we did not out-score them. I felt like we competed against Cal really well, but we got exposed in areas where we’re the weakest, so we’ve got some work to do before we see them again in January.”

The three-session competition served as the first official collegiate meet for UCLA’s freshmen, who make up 15 of the program’s 43 roster spots. Freshman swimmer Ana Jih-Schiff led the Bruins in top-10 finishes with four.

Wolfrum highlighted the first-year performances and said she was proud of the way they competed.

“Ana had a really great meet. She did especially well,” Wolfrum said. “Joanie Cash had some really strong swims and helped out some relays. Mia Chang had a couple of great backstrokes. Emma Matous swam strong all-around and swam a lot of events. Our freshmen are really stepping up across the board and that’s fun to see.”

Six UCLA swimmers ended the weekend with two top-10 finishes, including Chang. The only other Bruin to place third in a race, junior swimmer Stephanie Su, completed the 1650-yard freestyle with a time of 17:36.83.

Senior swimmer Abriana Howard clocked in at 2:02.89 to earn fifth in the 200-yard backstroke. Competing in the event after overcoming an injury from earlier this year, Howard said her finish gave her confidence moving forward.

“I definitely was excited about that finish and the time for this point in the season because I was injured in the spring,” Howard said. “Just having that knowledge that my rehab has been paying off and will continue to pay off is reassuring. But I’d like to get back to where I was and maybe even win one time.”

With its first home dual meet two weeks away, Howard said the Bruins are excited for future competition.

“(Placing third) solidifies that work we’ve done and that we’re heading in the right direction with our training,” Howard said. “We’re all hungry to be more competitive with Cal, who won the meet, because they’re very competitive when it comes to the end of the season. We want to be one of the best teams in the country, so we’re hungry for more.”