By Clare Hollywood and Calista Nocella 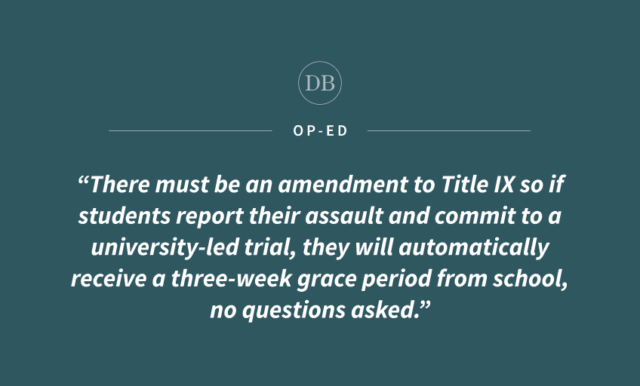 Editor’s note: the following op-ed contains a graphic description of sexual assault, which could be disturbing to some readers.

“It’s been 3 weeks now and my body has become a ghost, desensitized from life without any signs of a soul. How could they rape me, and then leave me to die lying face down asleep in my own vomit?” This was taken from my diary, a month after I was raped by two men I trusted and knew during my sophomore year at UCLA.

In an effort to gain a sense of empowerment, I went through the Title IX Office to go through a university-led trial and to receive academic support during the eighth week of the quarter. However, I felt immensely distressed because the office said it was my responsibility to talk to my professors to determine if I had to take finals in two weeks. Not wanting my abusers to falsely believe they had power over me, I did not want to take time off or drop out of school; nonetheless, my rape had a severe impact on my grades.

The UCLA Title IX Office follows and functions under the policy detailed by the Education Amendments of 1972 stating that, “No person in the United States shall, on the basis of sex, be excluded from participation in, … or be subjected to discrimination under any educational program.” This policy allows the office to provide resources in response to sexual violence, sexual harassment, statutory rape and more. It also enables the office to operate at a feasible and measurable level, in which its services should be easily accessed and attained by all students attending UCLA.

Every year, UCLA’s Office of Equity, Diversity & Inclusion shares a Public Accountability Report. Between July 2019 and June 2020, the Title IX Office drew data from only 1,336 reports. Of those reports, 32% represented cases of sexual violence. Yet, only 3% of reports resulted in a formal investigation. What my colleague and I want to highlight is that of the 45,742 undergraduate, graduate and professional students enrolled at UCLA in the 2019-2020 academic year, only 1,336 students reported their discrimination or assault to the Title IX Office. The Rape, Abuse & Incest National Network reports that 13% of undergraduate and graduate students are survivors of sexual violence. If this statistic is representative of UCLA, 1,336 is a severe undercount. This has led us to take a deeper look into the policies that the Title IX Office adheres to and question what barriers are in place that prevent students from reporting and accessing the care they need.

As women who have both attended undergraduate universities, we have witnessed and felt the gaps in care that occur when interacting with the Title IX Office. Not only are the policies put into place by the University of California directly impacting students’ personal lives, but they also are intrinsically connected with students’ academic success – or demise. Professors in a collegiate teaching setting hold a tremendous amount of power over their students’ trajectories. A 2014 study conducted by former Missouri Sen. Claire McCaskill’s office found that more than 30% of institutions do not provide sexual assault training to their students while more than 20% of institutions do not provide any sexual assault training to their faculty and staff. For students to feel supported by both the Title IX Office and their professors, the UC must provide adequate sexual assault response training to faculty and staff prior to the beginning of each academic year. This amendment to the Title IX policy would ensure professors are taught proper steps to take after disclosure rather than leaving the future of students’ academic careers to the instructor’s discretion.

Title IX needs to ameliorate how it supports students academically through this traumatic period in their lives. There must be an amendment to Title IX so if students report their assault and commit to a university-led trial, they will automatically receive a three-week grace period from school, no questions asked. It will then be the Title IX Office’s duty to contact the professors by only disclosing the student’s name. If students are given incentive to go through a university-led trial, this will empower survivors to tell their stories and start their healing process. With more survivors standing together to tell their stories, universities like UCLA can make real progress toward ending sexual assault on their campuses.

As important as giving academic relief to students is providing immediate support and therapy to survivors. If students file a Title IX report, the UCLA Title IX Office assigns a Campus Assault Resources & Education advocate to survivors. Although CARE advocates can be very helpful for survivors since they direct the student to therapy or other arrangements such as housing, there are only three advocates on UCLA’s professional staff. Additionally, the Title IX Office must stress the benefits of seeking clinical advice for survivors, reminding them how indispensable therapy can be in healing. This experience for survivors is traumatic, and the school needs to make sure it creates a continuum of care for students while they process their pain. Lastly, it is vital for abusers to know the benefits of receiving clinical support so they can grow and learn from their past behavior.

No law can address the multitude of feelings for sexual assault survivors, but there are many areas that Title IX can improve. I felt unsupported by UCLA – both academically and personally, as my abusers continued to harass me off campus and spread my story. If there were an amendment to Title IX, victims would feel encouraged to come forward and regain aspects of themselves that were ripped away by their abusers.

Hollywood graduated from UCLA in 2015 and is currently getting a master’s degree in social work at USC. She advocates for sexual assault survivors and volunteers at the UCLA Stuart House, a rape treatment center for kids. Additionally, Hollywood interns at schools providing counseling to students.

Nocella is a graduate student at USC pursuing a master’s degree in social work with an emphasis in social change and innovation. During her undergraduate experience at the University of Oregon, Nocella was an active member and advocate in Camp Kesem, a nonprofit serving children whose parents have been affected by cancer.