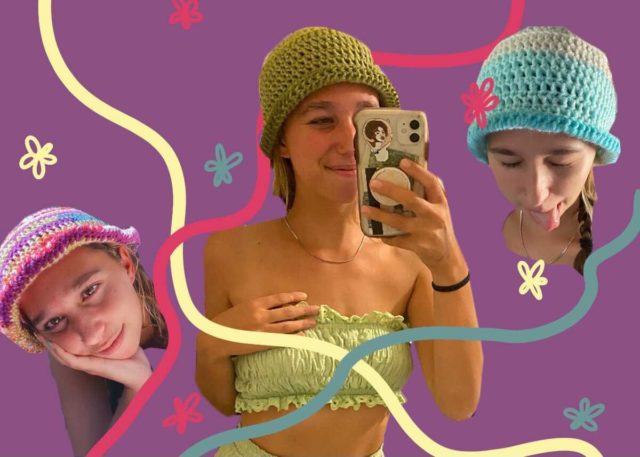 Second-year neuroscience student Hannah Reiter crochets colorful hats for her friends and sorority sisters. Giving them away at no cost, she said the process helps her build community and provides her with a creative outlet. (Courtesy of Hannah Reiter. Photo illustration by Ashley Kenney and Emily Dembinski/Daily Bruin staff)

Correction: The original version of this article misspelled Hannah Reiter’s name in a sentence.

Hannah Reiter weaves fun into her multicolored hats, one stitch at a time.

The second-year neuroscience student picked up crochet as a quarantine hobby and now makes multicolored crocheted bowler hats for her friends. She said she uses the crafting process to keep herself busy and likes posting pictures of her friends modeling the hats on an Instagram account she created for the project.

“I was home alone, bored and tired of watching TikToks all day,” Reiter said. “I’ve always thought crocheted hats were really cute, so I decided one day to go to Michaels and get some yarn. I watched a YouTube video and the rest is history.”

Her hat-making hobby began with a simple online crochet tutorial, she said. Although she distributes her creations, she said the hats are less of a business venture and more of a way to form connections with the people in her life. Reiter said the process of requesting a hat consists of choosing yarn colors and being patient, and word-of-mouth has been the main way she has advertised her crocheted creations.

Also, Reiter said she shies away from charging for her hats because most of the requests are from people she shares close relationships with. Making hats for her sorority sisters gives her an opportunity to talk with people she hasn’t spent much time with previously, she said, and the process of taking hat color requests, crocheting and watching her friends enjoy wearing the multicolored creations out in public makes the crocheting process worthwhile.

“I haven’t charged anyone because I’ve only been giving them to friends and family,” Reiter said. “I wouldn’t make it an expensive venture because I think it’s a way for me to connect with other people and make friends along the way.”

For second-year anthropology and economics student Jacob Keer, Reiter’s generosity contributes to the familial bond she forms with her close friends. Though Keer said he has yet to receive one of Reiter’s hats, he said he likes that each hat holds a piece of Reiter’s personality in it, and he looks forward to when he gets a hat of his own. Also, Keer said he appreciates that Reiter uses the hats as a way to destress despite having a hectic schedule.

“It’s a really nice way to express yourself,” Keer said. “I know for (Reiter) it was a way for her to remain stimulated at a time when she was having a lot going on in her head. They seemed like a cathartic coping mechanism (and) that’s really healthy.”

Reiter said she was drawn to crocheted hats because she likes that they are a universal piece of clothing that everyone can wear. Though she said hats were never something she initially incorporated into her own personal style, the creative process has gradually added more to her wardrobe. After making her Instagram account and seeing her friends in the hats, she started to prefer styling her crocheted hats into her everyday outfits, she said.

Second-year microbiology, immunology and molecular genetics student and Reiter’s roommate Grace Johnson said she is excited to see the design materialize on the hat she requested. Because the hats are pure crochet using one specific kind of stitch, the exact design of her hat depends on the way the green yarn she chose ends up being used as the crochet pattern is completed. Johnson said she is also excited to see the finished product because every hat looks different once it’s completed, and that makes the projects special.

“Her design quality is super creative,” Johnson said. “(From) the clothes she wears (to) the way she does her hair, it’s very individualistic. She’s really true to herself, and I think that translates into the hats as well.”

Going forward, Reiter said she hopes to continue making hats for friends and family as they request them, but she also wants to start learning how to make other crocheted items like tops and tote bags. She said she also wants to prevent the hobby from becoming more of a business venture in order to keep the original goal of spreading positivity. Connecting with other people in the crochet community is another way she hopes to continue using her hat-making as a way to form new friendships, she said.

“This was seriously a stress-relieving hobby of mine that started because I had FOMO,” Reiter said. “So, I started making hats, and now people like them. I think it’s fun to share something that I’ve made with other people.”