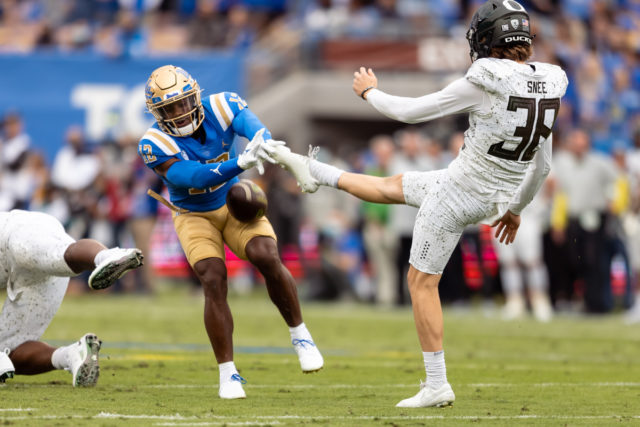 The Bruins had built a two-touchdown lead through 15 minutes of play.

But by the halftime whistle, the gap had shrunk to three.

The Bruins found paydirt on their first possession of the game, marching down the field on a 12-play drive that elapsed just over five minutes.

Junior running back Zach Charbonnet began the game-opening touchdown drive with four rush attempts and a juggling catch to move the sticks on 3rd-and-1. Redshirt senior running back Brittain Brown finished off the series, with a 13-yard run followed by a one-yard score.

After forcing a turnover on downs, UCLA gave the ball back to Oregon, courtesy of an interception from senior quarterback Dorian Thomspon-Robinson on the first play of the possession. The Ducks entered the game tied for 13th in the nation in forcing turnovers.

But the Bruins took the ball right back, forcing a three-and-out before redshirt junior defensive back Martell Irby shot through the A-gap to block a punt that he recovered himself.

It took UCLA all of four plays to cash in after the takeaway. Thompson-Robinson found redshirt sophomore running back Keegan Jones out of the backfield for a 19-yard gain, setting up the Bruins with a 1st-and-goal. On the ensuing play, the senior quarterback located redshirt junior running back Kazmeir Allen in the endzone from five yards out to put UCLA up 14-0.

After totaling 34 total yards on their first two drives, the Ducks’ third possession nearly quadrupled their yardage as they drove 88 yards in 13 plays. Senior defensive back Quentin Lake came up with a goal-line interception, but the play was called back on an offsides penalty by Lake, allowing Oregon to punch in its first score of the game and cut its deficit to seven points.

The Bruins answered with a 13-play drive of their own, but redshirt sophomore kicker Nicholas Barr-Mira pushed a 35-yard field goal wide left, giving the Ducks the ball back with a one-possession deficit.

Oregon responded with a second consecutive touchdown drive punctuated by a touchdown from running back Travis Dye to even the score at 14 apiece.

While both of Oregon’s scoring drives ended in rushing touchdowns, the Ducks gained the majority of their yards through the air. Quarterback Anthony Brown – who entered the game averaging 199 passing yards per game – totaled 167 passing yards on 15-of-22 passing.

Barr-Mira capped off the first 30 minutes of play with a 37-yard field goal to send the Bruins into halftime with a three-point lead.

Oregon will receive the ball to start the second half.