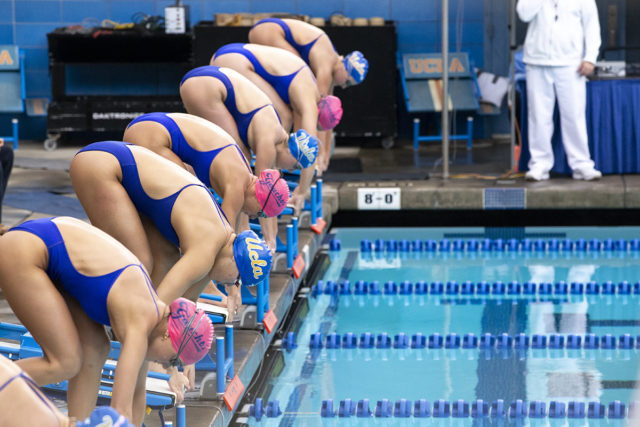 Swimmers line up before the start of a race. UCLA swim and dive defeated UC Santa Barbara on Saturday for its first home dual meet of the season. (Michael Vigman/Daily Bruin)

On homecoming weekend, the Bruins welcomed back a long-standing tradition of their own – outswimming the Gauchos.

UCLA swim and dive (1-0) finished its first home dual meet of the season with a 167-92 win over UC Santa Barbara (0-1) at Spieker Aquatics Center on Saturday. The Bruins now hold a 36-1 all-time record versus the Gauchos and have remained undefeated against UCSB since 2017.

Coach Jordan Wolfrum said UCLA’s prevailing advantage over its opponent this weekend can be attributed to the team’s depth and ability to secure first, second and third place in multiple events.

“(There were) a couple of events … where we had almost two full heats of women who were really competitive in those events,” Wolfrum said. “To be able to have enough people exhibitioning that could have scored for you I think is an exciting place to be.”

While UCLA had top-three finishes in most of the sprint events, the team lost out to UCSB in the 1000-yard freestyle and the 500-yard freestyle. In both races, Bruin swimmers held early leads but were not able to finish ahead of the Gauchos.

“We got beat up in the distance freestyle events. We had a few people out sick, and that certainly hurt us there,” Wolfrum said.

Among the podium finishers, junior swimmers Brooke Schaffer and Rachel Rhee both earned individual and medley wins, with Rhee also earning a top-three finish in the 100-yard free.

Schaffer led from start to finish in the 100-yard freestyle, clocking in at 51.71 to secure her win. The junior swimmer also swam for the winning squads in the 200-yard medley relay and the 400-yard freestyle relay in addition to placing third in the 50-yard freestyle.

“I need to really work on my rate and get my arms spinning faster,” Schaffer said. “In the beginning of the season, we’re working on getting in shape and strength.”

Another upperclassman to secure wins for the Bruins, senior Ella Kirschke posted wins in the 200-yard individual medley and the 400-yard freestyle relay.

Wolfrum said since the Fresno State Invitational, the team has already made improvements that paid off against the Gauchos.

Schaffer said she and some of her teammates were nervous going into the meet because some swimmers were not competing in their primary events. However, she added that the opportunity to race in other events allowed her and her teammates to hone different skills.

“It gives you a chance to race in a way you haven’t before,” Schaffer said. “I usually do longer events, I did more sprints today. … It gives you different challenges and aspects to work on that all help you with your primary events.”

Chang, who clocked in at 56.13 to win the 100-yard backstroke, said the team’s high energy was especially motivating.

“Everyone fed off of each other’s energy, and it really made it something fun,” Chang said.

The meet was one of two home dual meets for UCLA in the 2021 calendar year, and Schaffer said having fans back in the stands contributed to the Bruins’ excitement to swim Saturday.

Chang added that, moving forward, her biggest goal for the season is to let loose and simply enjoy her time swimming.

“(We were) swimming for each other and just not focusing on the time necessarily,” Chang said.

The Bruins will next take the pool Oct. 30 for the first Pac-12 meet of the season against Washington State.