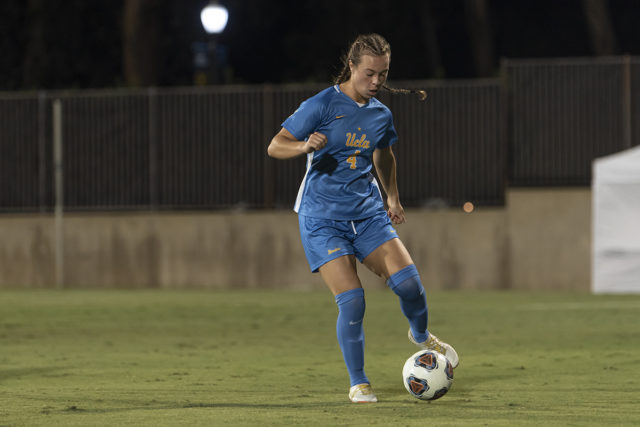 Freshman defender Lilly Reale lines up for a pass. Reale and No. 5 UCLA women's soccer earned four points in the Pac-12 standings after a weekend slate in Washington, moving two points back of first-place USC. (Christine Kao/Daily Bruin staff)

A rain-soaked weekend up north tightened the gap at the top of the Pac-12 standings.

The road trip marks the second time since 2014 that the Bruins have gone without an away loss to either the Huskies or the Cougars.

“This is a really hard road trip,” said coach Amanda Cromwell. “Especially the weather and rain and cold. We have a bunch of warriors on this team. They just have each other’s back and try to figure out ways to win.”

Following its performance over the weekend, UCLA currently ranks third in the Pac-12 and has three conference games remaining on its schedule, two of which are against second-place Stanford and first-place USC. The Bruins trail the Cardinal by a point and sit two points behind the Trojans.

With UCLA controlling its own destiny in the Pac-12 and the NCAA tournament looming, freshman defender Lilly Reale said the team’s performance over the weekend, particularly the 110-minute draw in Pullman, was a great experience for the future.

“It was a frustrating game for us, but I thought we battled hard,” Reale said. “Our coaches are talking about how these are going to be the type of games you’ll play in the tournament, so I thought it was important for us to get that experience as a team.”

Reale said the blue and gold tries to use its style of maintaining possession to negate the momentum other teams find after squaring up the score.

“We just try to keep possession of the ball,” Reale said. “We could have done that a little better (Sunday), and we’ll incorporate that in after watching film for the next game. When things get hard, we tend to try and keep possession more. As long as we do that, then that’s when we gain momentum back in the game.”

The ability to control possession may come into play against the Trojans and the Cardinal, two teams who have netted goals against the Bruins in each of their five and nine previous meetings, respectively.

In addition to playing in unusual weather, the Bruins and the Cougars combined to commit 25 fouls Sunday, a season high in one game for UCLA. While UCLA could not conjure up a golden goal against Washington State, redshirt senior forward Kennedy Faulknor said the physicality will help in preparation for the coming games.

“We just need to come back next game and try to capitalize and get on those teams early,” Faulknor said. “They are going to try to play these physical games and try to throw us off in our playing style, so we’re just going to come back stronger for next month.”

With three days off before starting another doubleheader weekend against Stanford, Cromwell said rest is paramount.