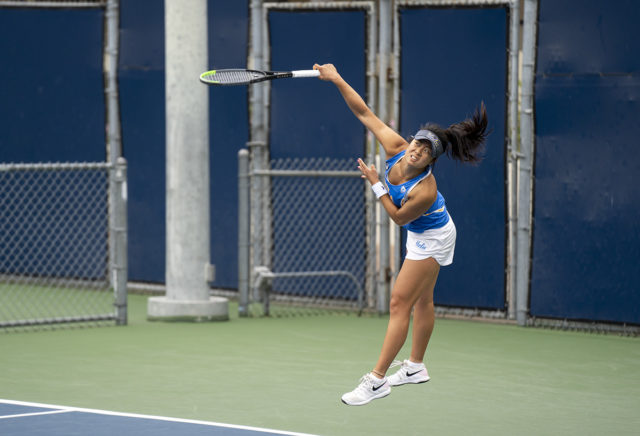 When they arrived in San Diego, sophomore Vanessa Ong and freshman Elise Wagle had never played a doubles match together.

They left with the doubles crown.

The UCLA women’s tennis pairing claimed the doubles title Sunday at the ITA Southwest Regional Championships at Barnes Tennis Center. Ong and Wangle won all five of their matches en route to each player’s first collegiate title of their careers. With the victory, Ong and Wagle advanced to the ITA National Fall Championships that will take place in November.

“I need to see more,” Sampras Webster said. “That’s really great to have and great information to have, but we probably have more tennis to play, and we’re going to see a lot more at the fall championships, so we’re excited to see how they do and how they get tested there nationally.”

Although Ong and Wagle’s performance was sandwiched by walkover victories in the round of 32 and the final, their first true match pitted them against the No. 11 doubles team in the nation in Pepperdine’s Shiori Fukuda and Taisiya Pachkaleva. The pair of Bruins pulled off a 6-3 upset to earn a spot in the quarterfinals.

The UCLA duo then turned in a victory against San Diego’s Abigail Desiatnikov and Jordyn McBride, moving on to the semifinals with a 6-2 triumph. The second pair of Waves – Savannah Broadus and Janice Tjen – forced a third-set tiebreaker against Ong and Wagle. After UCLA claimed the first set 6-4, Pepperdine evened the semifinal at a set apiece by taking the second frame 6-2.

In the tiebreaker, the Bruin dyad continued their winning ways, ultimately triumphing 6-4, 2-6, 1-0 (10-6) to effectively lock up the doubles title. The final would end up being a walkover because of injury.

Ong said Wagle’s game gelled well with hers, so they were able to find a strategy that worked for them.

“Elise being a really big ball-striker helps me a lot at the net,” Ong said. “I was able to set her up on the baseline with different shots like lobs and more down-the-line shots that she was also able to pinch.”

Junior Sasha Vagramov, who competed in the tournament along with Ong and Wagle, said she noticed similar trends in the pair’s complementary playing styles.

“Elise has a pretty solid pop on her serve, and Vanessa’s super quick, so that really compliments each other well,” Vagramov said. “Elise can set up the point really well, and then Vanessa’s always there to finish it at the net.”

On the singles front, Vagramov was the top performer among the six players for UCLA who saw singles action. The junior entered the round of 16 having not dropped a set in the tournament but was pushed to a third set by Victoria Flores of Pepperdine, the nation’s No. 13 singles player. Vagramov upended Flores with a 7-5, 6-7(5), 6-1 decision, but subsequently fell 6-1, 6-2 to national No. 53 and eventual tournament champion Lisa Zaar of Pepperdine in the quarterfinals.

Since the beginning of the fall campaign at the Women of Troy Invitational, Vagramov has posted a combined 7-1 mark in singles play, the best singles record of any Bruin.

“She’s understanding her game and playing to her strengths,” Sampras Webster said. “It’s a high-risk game, so when she’s playing well and feeling a lot of confidence, she can beat anyone in the country to be honest.”

Vagramov said an attack-laden playing style has helped her claim victory after victory in the past few events.

“I’m happy with the way I’m playing,” Vagramov said. “I have a quite aggressive game style, so that can help me (with) finishing points and finishing matches effectively.”

Preseason play for the Bruins will come to a close with the ITA National Fall Championships and Jack Kramer Fall Invitational, with Ong and Wagle heading to the former to represent not only the blue and gold but the entire Southwest.