By Sydney Kovach and Victoria Li 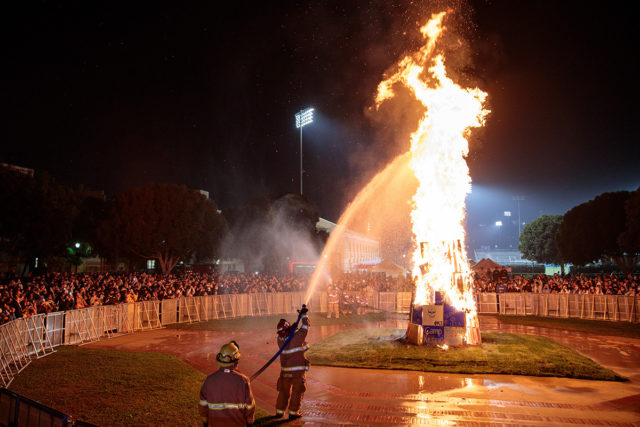 More than 1,000 Bruins gathered in Wilson Plaza in anticipation of Saturday’s football game against the Trojans.

Students watched as two individuals lit an approximately 40-foot bonfire as part of the annual Beat ’SC Rally organized by the Student Alumni Association on Wednesday night. It was the first bonfire since 2017 after UCLA canceled the bonfire in 2018 and 2019 out of concern for wildfires at the time and canceled the whole rally in 2020 because of the pandemic.

The American Indian Student Association opened the rally by acknowledging the unceded territory of the Gabrielino-Tongva peoples.

Eliana Bohn, a second-year molecular, cell and developmental biology student, lit up the stage first with a fire performance, which was followed by Signature A Cappella’s Beyoncé-inspired number.

Bruin Bhangra, an Indian folk dance team, took the stage next with a high-energy performance with influence from Western hip-hop music. Other performances included NSU Modern, a hip-hop dance team, Bruin Harmony, an all-male a cappella group, and the UCLA Spirit Squad.

Martin Jarmond, UCLA’s athletic director, took the stage to energize the crowd, chanting, “I believe that we will win!”

Jarmond helped lead UCLA Athletics to four conference championships and one national championship since his hire in 2020. Jarmond, who also helped the men’s basketball team reach the 2021 NCAA tournament Final Four, said he had a special affinity for the first- and second-year students because the 2021-2022 academic year is the first time he’s been able to cheer on the Bruins on campus as well.

The gymnastics and women’s basketball teams also made an appearance, guiding students and others in 8-claps. Coach Chip Kelly and the football team then came on stage.

Kelly roused the crowd by declaring that UCLA has the best fans in the Pac-12, thanking Bruins for their turnout at the game against LSU on Sept. 4 and ESPN’s “College GameDay” on Oct. 23.

UCLA football’s redshirt senior defensive back Qwuantrezz Knight excited the crowd when he said UCLA will be taking home the Victory Bell on Saturday.

Students cheered as the bonfire structure erupted in flames.

Los Angeles Fire Department firefighters, who had been monitoring the bonfire, extinguished the flames around 7:06 p.m.

Stephanie Ayala, a first-year physiological science student, said the rally helped take her mind off schoolwork and share a fun moment with friends.

It was nice to see the performances from UCLA students, said Alexis Ayala-Alvarado, a first-year education and social transformation student. While they have not been following the rivalry for long, Ayala-Alvarado said they are excited to watch the game and see the Bruins hopefully win.

Den Operations, leaders of UCLA Athletics’ student section, have been guarding the Bruin Bear in advance of the game Saturday and will be holding a watch party of the game in the Ackerman Union, A-level TV Lounge, said Olivia Nelli, the president of Den Operations and a fourth-year international development studies and public affairs student.

Sarah Huang, the assistant director of SAA’s Bruin Spirit Committee, who helped plan the event, said she felt a renewed sense of school spirit now that people had returned to campus.

It was especially exciting to see the turnout at the rally after not being able to hold the bonfire for three years, added Huang, a third-year human biology and society student.

“This is a super big event every single year, and of course, this year did not disappoint,” she said.

Kovach is the 2021-2022 assistant News editor for the campus politics beat. She was previously a contributor for The Stack. Kovach is a fourth-year global studies student at UCLA.

Li is the 2021-2022 science and health editor. She was previously a contributor for the science and health beat. She is also a third-year human biology and society student at UCLA who enjoys writing about research and public health.