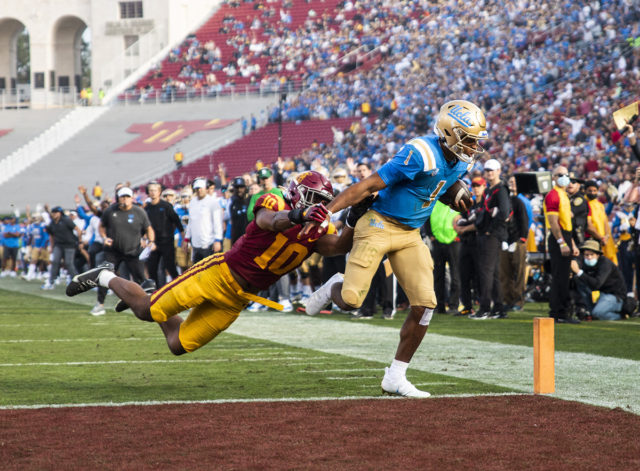 UCLA football senior quarterback Dorian Thompson-Robinson runs in his fourth touchdown of the afternoon against USC. Thompson-Robinson finished the first half with 10 completions for 239 yards in the air to go along with his four total touchdowns. (Ashley Kenney/Photo editor)

A four-touchdown first half from Dorian Thompson-Robinson has left the Bruins 30 minutes from reclaiming the Victory Bell.

After starting the game with only two completions on his first eight attempts, the senior quarterback completed eight in a row for 154 yards to help the Bruins secure the double-digit lead. The four total touchdowns from the senior signal-caller are tied for the most he has had in a game this season.

After USC scored on the game’s first possession – a 63-yard drive capped off by a field goal from kicker Alex Stadthaus – the Bruins and Trojans traded interceptions. Thompson-Robinson threw one more on the next drive, giving the signal-caller two picks on his first two pass attempts.

Thompson-Robinson would throw incompletions on his next two pass attempts after starting the drive backed up on his own 6-yard line. He started the game 0-of-4 with two interceptions after his team trailed the Trojans early.

But Thompson-Robinson connected on two deep shots over the middle on his ensuing two passes – one to redshirt junior tight end Greg Dulcich and the other to redshirt junior running back Kazmeir Allen. The latter went for 45 yards for the Bruins’ first points of the afternoon.

Thompson-Robinson failed to complete both of his next two pass attempts on the Bruins’ next possession – forcing UCLA to punt at the start of the second quarter. But on UCLA’s ensuing drive, the quarterback followed it up with a 4-of-4, 53-passing-yard drive that ended with a 23-yard touchdown reception from redshirt junior wide receiver Kyle Philips.

The senior again found Allen deep over the middle for a score on the next drive, this time from 58 yards out midway through the second quarter to extend the UCLA lead to 11.

With redshirt senior running back Brittain Brown unavailable, junior running back Zach Charbonnet garnered the bulk of UCLA’s rushing attempts. After being held to 34 yards on his first eight carries, the junior broke loose to end the half, rushing for 40 yards on a drive capped off by a 4-yard touchdown run from Thompson-Robinson.

On the other sideline, Trojan quarterback Jaxson Dart finished the first half with 12 completions on 25 attempts and 133 passing yards.

USC scored most of its points in the first quarter, as a 7-yard touchdown run from running back Vavae Malepeai with 10 seconds to go in the opening period would be the only Trojan points for nearly a whole quarter. Another Malepeai score at the 23-second mark in the second quarter would put USC back within 11.

The Bruins will receive the ball to start the second half.