No. 2 UCLA men’s basketball to play Bellarmine, No. 1 Gonzaga in Las Vegas 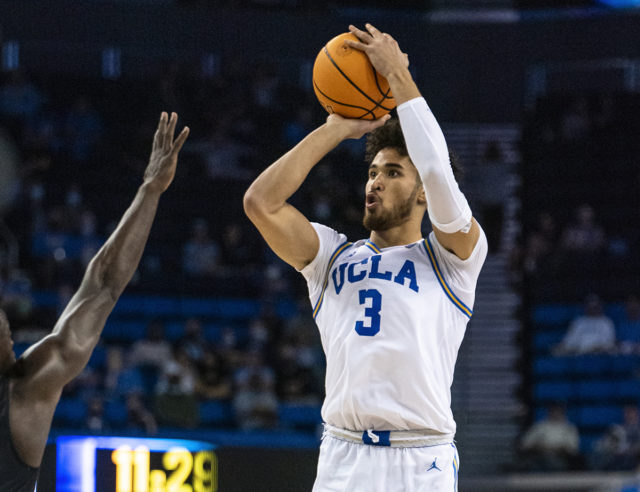 Junior guard Johnny Juzang rises up for a shot in No. 2 UCLA men's basketball's win over North Florida. Juzang and UCLA will match up against No. 1 Gonzaga in a rematch of the Final Four game. (Jeremy Chen/Daily Bruin staff)

In April, former Gonzaga guard Jalen Suggs banked in a shot as time expired to end the Bruins’ run for a 12th NCAA title.

Just over seven months later, the blue and gold will have its first chance at revenge in a matchup between the two highest-ranked teams in the nation.

No. 2 UCLA men’s basketball (4-0) will travel to Las Vegas to face No. 1 Gonzaga (4-0) on Tuesday, one day after taking on Bellarmine (0-4) in the Good Sam Empire Classic. The game against the Bulldogs will be the 43rd time the top two teams in the AP Poll have met in the poll’s history, with the all-time series between No. 1 and No. 2 teams currently tied at 21-21.

Coach Mick Cronin said he expects another tightly contested battle Tuesday, as has been the case in each of his two meetings with Gonzaga coach Mark Few. A decade prior to his arrival in Westwood, the former Cincinnati coach also fell to Few’s Bulldogs in a one-possession overtime defeat in 2009.

“Mark and I have played twice. He’s got me both times in overtime, and both times, in regulation, my team had the ball.” Cronin said. “I would expect overtime Tuesday night since every time we play, it seems to happen.”

Suggs and former Bulldog forward Corey Kispert have since entered the professional ranks as first-round draft picks in the 2021 NBA Draft, but the Bulldogs return their leading scorer from last season in forward Drew Timme. The forward scored a team-high 25 points in the Final Four matchup with the Bruins and has averaged 20.8 points on 65.3% shooting from the field this season.

The team has also received some reinforcements from both new and returning players, with guard Julian Strawther – who averaged 3.4 points per game a year ago as a true freshman – and Iowa State transfer guard Rasir Bolton contributing double-digit points per contest. The most highly touted addition is Chet Holmgren, the No. 1 recruit in the 2021 recruiting class.

The freshman center has posted 11.3 points, 7.3 rebounds, four assists and four blocks per game – tied for the fifth-highest mark in the nation – with a field goal percentage of 68% this season. Cronin said Holmgren, who stands at 7 feet, brings a new dimension on defense for Gonzaga.

“I’ve seen Chet in person. He looks like he can touch the rim without jumping,” Cronin said. “I think that’s where he’ll help because Drew Timme’s such an elite offensive player that Chet can protect the rim for them on defense – probably something they didn’t have last year.”

The Bruins are coming off four straight home victories, beating their opponents by an average of 25.5 points to start the season. Despite returning every active member of the 2021 Final Four squad to the roster, they will be without redshirt senior forward Cody Riley because of a knee injury.

Despite the early season success, Cronin said it’s a matter of when, not if, more speed bumps will hit his team, as his team has already dealt with two season-ending injuries in addition to Riley’s week-to-week setback.

“It’s always coming. It’s coming for every team,” Cronin said. “It’s already come for us in losing players to injuries, but the hardest bumps are in the form of adversity or when you lose because that’s when you’re really tested.”

But before the high-profile matchup versus Gonzaga, UCLA still has one more team to prepare for.

Bellarmine has lost its four games this season by an average of 24.8 points, though it has played two top-six teams – including a 42-point loss to Gonzaga. The program was elevated to the Division I level prior to last season and finished with a 14-8 record in 2020-2021.

Regardless of the opposition’s record, redshirt junior guard Tyger Campbell said the Bruins are not taking their opponent for granted, identifying the Knights’ ball movement as something to watch for on defense. Bellarmine posted the 11th highest offensive rating in the country last season.

“I saw a YouTube video about Bellarmine. It was (titled) like, ‘This team takes zero dribbles every possession,'” Campbell said. “I know they pass the ball very well and cut very well so they’re a very well-coached team.”

Junior guard Johnny Juzang reiterated the team’s sole focus on the upcoming matchup with the Knights rather than the looming rematch with the Bulldogs.

“We’re excited for the matchup (against Gonzaga), but we got a game first that we got to take care of,” Juzang said. “We got a good team and opponent ahead of us on Monday.”

UCLA will match up with the Bellarmine at 5 p.m. on Monday before taking the court against Gonzaga at 7 p.m. on Tuesday.