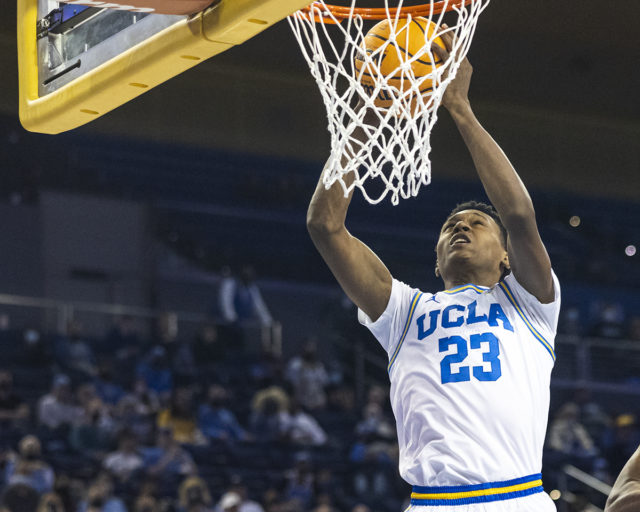 Freshman guard/forward Peyton Watson dunks the ball in No. 2 UCLA men’s basketball’s win over CSU Bakersfield on Nov. 9. Watson put up a team-high 19 points against Bellarmine in the Bruins’ victory over the Knights on Monday. (David Rimer/Assistant Photo editor)

In his first collegiate game away from Pauley Pavilion, Peyton Watson showed no signs of missing home.

Behind the freshman guard/forward’s career-high scoring night, No. 2 UCLA men’s basketball (5-0) defeated Bellarmine (0-5) by a score of 75-62 in its first game of the Good Sam Empire Classic in Las Vegas. In addition to his team-leading 19 points, Watson added four rebounds and two steals while shooting 9-of-12 from the field.

In his first four games as a Bruin, Watson had never scored in double figures, but the freshman nearly got there in the first half.

The Long Beach native scored nine points to open the game – the team’s second-highest mark. However, beyond Watson, the Bruins’ first-half offensive output was down from its usual level.

Despite coming in with the nation’s second-best scoring offense, the Bruins were held to their third-lowest half total of the season in the opening frame. After averaging 94.8 points per game across its first four contests, UCLA was held to 36 first-half points by a Bellarmine defense that allows 84.8 points per game – a mark that would rank 340th in the nation.

In their place, Watson and senior guard David Singleton took the bulk of the secondary scoring duties. The pair combined for 17 first-half points behind junior guard Johnny Juzang’s 11.

After holding a 14-8 advantage at the under-12-minute media timeout, UCLA ran off a 7-0 run in less than two minutes, with Watson and Singleton scoring all seven points during the stretch. A Watson alley-oop dunk capped off the run and forced the Knights to call a timeout at the 9:58 mark.

Later in the half, Watson would connect on the first 3-pointer of his young career to extend the lead to 16 two minutes later. The Bruins entered the halftime locker room with an 11-point advantage.

Following the halftime break, UCLA again went on a run, outscoring Bellarmine 13-2 to open the final period. Watson – who started the half in place of Juzang – scored six points during the stretch to extend the lead to 49-27.

But the Knights would respond with a run of their own, reducing the blue and gold’s lead to 13 points at the 7:58 mark of the second half. UCLA’s advantage would fall to 10 multiple times – including with less than a minute to go – but a layup by Juzang and a 3-pointer by Bernard padded the Bruins’ lead in the final 60 seconds.

For the game, UCLA shot 45.2% from the field – its worst shooting performance of the season. In addition to Watson, Singleton and Juzang were the only other Bruins to finish with double digits in the points column, as the two scored 13 points each.

UCLA will conclude the event with a matchup against No. 1 Gonzaga on Tuesday night.