Men’s basketball fails to recover from early deficit, falls to Gonzaga by 20 points 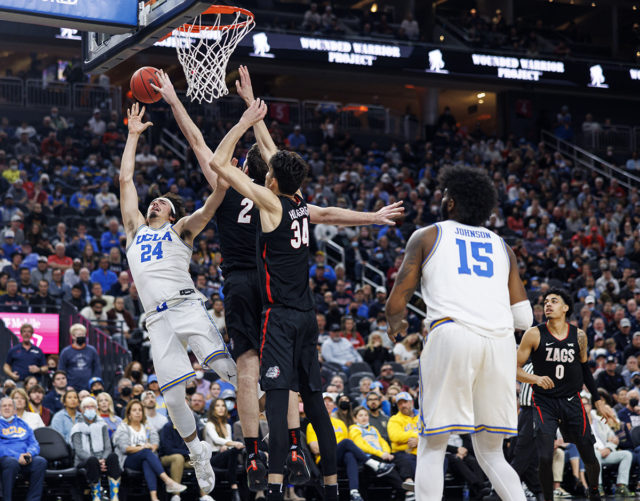 Junior guard/forward Jaime Jaquez Jr. gets his shot block by Gonzaga forward Drew Timme. Jaquez led the Bruins with 19 points but shot 7-of-22 from the field. (David Rimer/Assistant Photo editor)

LAS VEGAS — Seven months ago, Gonzaga and UCLA played a back-and-forth clash that lasted – quite literally – until the final buzzer.

Neither team held a lead greater than seven points in that Final Four contest, with the advantage changing 19 times before former Bulldog guard Jalen Suggs banked in a deep 3 as the clock expired to win the game.

Tuesday’s rematch, however, was a different story.

No. 2 UCLA men’s basketball (5-1) sustained its first loss of the season, falling 83-63 to No. 1 Gonzaga (6-0) in the finale of the Good Sam Empire Classic at T-Mobile Arena. The 20-point defeat was two points away from being the worst loss in the Mick Cronin era.

The third-year coach said UCLA’s problems start with its defense.

“We’re not a good defensive team,” Cronin said. “We got exposed tonight by a great team.”

Contrary to the March Madness matchup, the Bulldogs jumped out to a 21-point lead within the first 10 minutes of the game Tuesday night and never looked back.

After missing its first shot to open the night, Gonzaga responded by making its next eight attempts – half of them coming on layups – to give the team 18 early points. UCLA, on the other hand, went 3-of-13 during that same stretch before missing six more shots in a row, falling behind 29-8 prior to the halfway point of the period.

The Bruins would outscore their opponent 17-16 the rest of the frame to trim the deficit to 20 heading into the halftime break – their largest halftime disadvantage in two seasons.

When asked what he said in the locker room after the first half, Cronin said he kept it short.

Entering the second half with a lead of 20 points or more for the fifth time this season, the Bulldogs picked up right where they left off in the opening minutes of the final frame.

After a pass to Myles Johnson gave the redshirt senior center the ball with nobody between him and the basket, Gonzaga center Chet Holmgren recovered to block his fourth shot of the night. The five-star freshman grabbed the rebound, took the ball coast-to-coast and finished the possession with a dunk.

Cronin – who reiterated that UCLA allowed seven such fastbreak runouts in the first half – said the Bruins’ defensive woes in transition started with their inability to stop the ball.

“(The Bulldogs) weren’t the Lakers. It wasn’t Kareem to Magic to Byron to Worthy for the dunk,” Cronin said. “It was the guy with the ball dribbled the length of the court and laid it in. We didn’t offer much in the way of resistance.”

To go along with the quartet of blocks, Holmgren finished the game with 15 points and six rebounds in 28 minutes of action.

Cronin said the addition of Holmgren alongside preseason Naismith Player of the Year forward Drew Timme – who scored 18 points Tuesday night – has increased the Bulldogs’ interior presence since the last time the Bruins played them. Gonzaga had six blocks in the game – all of them coming from Holmgren and Timme.

“They are very different. They didn’t play two big guys together (in April),” Cronin said. “It makes them better in the paint defensively.”

Shortly after Holmgren’s dunk to begin the second half, Gonzaga guard Andrew Nembhard discarded junior guard Johnny Juzang with a dribble move, leaving the Bruin defender in the paint as the Bulldog rose up for his third 3-pointer of the night to extend the lead to 23 at the 16:31 mark.

While glancing at the stat sheet, Cronin said he didn’t need to know the numbers to understand Nembhard’s impact.

“I don’t even need to see his stats, he was clearly the best player on the floor tonight,” Cronin said. “Hands down. I don’t think anybody is going to disagree with that – not if you were at the game.”

The advantage would sit at 16 about 2 1/2 minutes later, marking the closest margin of the second half with the Bruins still shooting below 50% from the floor. UCLA began the week as the nation’s second-best scoring offense – scoring 94.8 points per game in its opening four contests – but averaged 69 points across two games in Las Vegas after scoring 75 points against Bellarmine on Monday.

Jaime Jaquez Jr. paced the Bruins in scoring with 19 points. However, the junior guard/forward did so on 7-of-22 shooting, one day after Jaquez scored six points in UCLA’s win over Bellarmine.

No Bruin beyond Jaquez scored more than 12 points, with Juzang and redshirt junior guard Tyger Campbell – UCLA’s next highest scorers – each putting up 11.

“If you only win when the ball goes in, you are going to be a .500 team,” Cronin said. “You better fill out your NIT papers.”