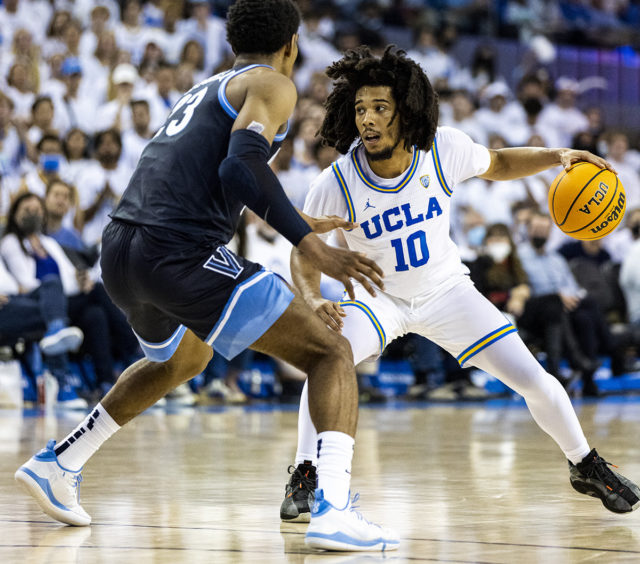 The Bruins emerged victorious in their Las Vegas rubber match.

Following a split in its two games in the Good Sam Empire Classic at T-Mobile Arena earlier in the week, No. 2 UCLA men’s basketball (6-1) defeated UNLV (4-3) on Saturday 73-51 at Thomas & Mack Center. The win marked the Bruins’ first true road victory of the season.

The last time UCLA took the court, it sustained a 20-point loss to No. 1 Gonzaga. After an early jumper from UNLV forward Donovan Williams, UCLA was facing a deficit in the gambling capital of the world, this time down 2-0 early in the contest Saturday.

After Williams’ jumper, however, UCLA broke off a 14-0 run on the back of nine points from Jules Bernard. The senior guard made two 3-pointers during the stretch after shooting 1-of-10 from beyond the arc in his previous three games.

The Runnin’ Rebels clawed back to make it a four-point game midway through the half, scoring 18 points to the Bruins’ 10, which trimmed the UCLA lead to 24-20.

Redshirt junior guard Tyger Campbell, however, drained his first 3 in three games to extend the advantage back to seven. On the next possession, junior guard Johnny Juzang put in a layup on a fast break to make it nine.

Back-to-back 3s from Juzang and senior guard David Singleton bookmarked the opening period, giving the Bruins their largest lead of the night at that point at 15. Juzang’s triple also secured his seventh straight game of double-digit scoring to open the campaign.

But UCLA’s late first-half surge would not carry over after the break, as the Bruins were held to 13 points in the first 10 minutes of the second half, putting them on pace for their lowest second-half scoring output of the season. In the final 20 minutes, UCLA shot 42.9% from the field, a near-10% decrease from the first period.

Despite that, the Runnin’ Rebels would never get closer than nine all second half as the Bruins outscored their opponent by seven in the final frame, giving them the 22-point victory. UNLV shot 33.3% in the second half following a 28.1% performance to open the contest, giving it the lowest field goal percentage for a regular-season UCLA opponent since the 2019-2020 season.

The Bruins were paced by Bernard, who put up 18 points to lead all scorers and was one of four Bruins to score more than 10 points. Campbell tied his season high with 15 points.

UCLA will next begin conference play with a matchup against Colorado on Wednesday.