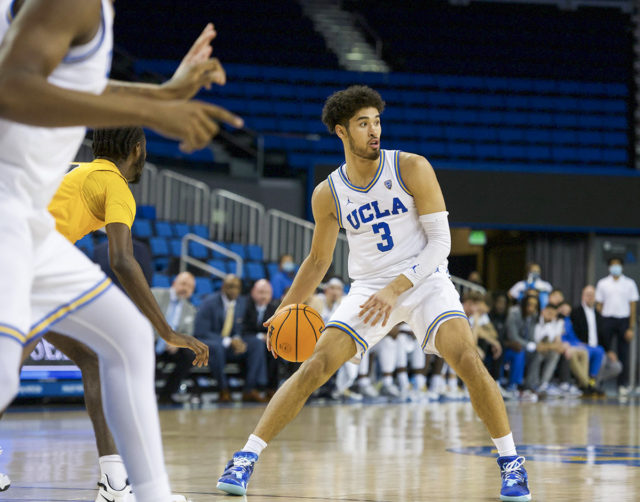 For the first time since March 2021, Bruin basketball at Pauley Pavilion was played behind closed doors.

Right from tipoff, simulated fan noise pumped through the stadium’s speakers, just as was done for the entirety of last season. After the crowd noise was turned down by the production crew, the echoes of the ball hitting the hardwood, the squeaks of the players’ shoes and the yells of the Bruin coaching staff filled the nearly empty arena.

No confetti, no Den, no marching band.

“We miss the fans,” said junior guard Johnny Juzang. “Hopefully we’re going to be able to get them back because we love having them there and playing in front of them – it makes a huge difference.”

It was UCLA’s first game in nearly one month, after the cancellation of its contest against Alabama State marked the first in a string of six called-off matches.

The pause in play was enough time for Cody Riley to return after he went down with a knee injury in the blue and gold’s season opener, and the redshirt senior forward was the one who put UCLA on the board first.

“The first bucket was his bucket, a patented dribble to the right, spin back to the left for a strong bucket,” said senior guard Jules Bernard, the Bruins’ leading scorer. “I was happy for him. It’s good to see that he’s feeling comfortable.”

Despite the opening two points, the forward was kept quiet throughout the rest of the half. The slow start was not limited to just Riley, however.

UCLA started 2-for-10 from the field in the first nine minutes of play but managed to keep pace with the Beach, courtesy of 3-pointers from redshirt junior guard Tyger Campbell and senior guard David Singleton.

At the charity stripe, the shots wouldn’t go in either, as the blue and gold sank five of its first 10 shots from the line – including a scoreless trip from Juzang.

“I can’t remember the last time I missed two free throws in a row,” Juzang said.

But halfway through the first half, the shots began to go down. Off a 16-2 stretch that came on the back of four turnovers from the Beach, the Bruins pushed the lead to 11. Senior guard Jules Bernard led the team with nine first-half points, scoring five of them during the run.

“You can’t ask me enough questions about Jules because he deserves to get a lot of publicity,” Cronin said. “He’s one of the best wing players in America.”

Jaime Jaquez Jr., who scored eight first-half points, limped off the floor with less than two minutes in the opening period. The junior guard/forward did not return for the second half and was later confirmed to have a sprained right ankle, according to a UCLA spokesperson.

Despite Jaquez’s absence, the Bruins kept their double-digit advantage through the final buzzer.

Midway through the second period, UCLA was on another run, this time with contributions from all over the floor.

Juzang – with 18 points on the night – got the offense started in the second half with a jumper in the paint. Bernard and sophomore guard Jaylen Clark cashed in from 3-point range, and the Bruin lead swelled to 23.

The Beach hung around, though. As the minutes on the scoreboard ticked down, the 23-point UCLA lead became just a 13-point advantage.

“Long Beach played great in the second half,” Cronin said. “I thought they made a lot of hard shots and it made us keep playing for 40 minutes.”

However, two more 3-pointers from Bernard and Campbell helped to put the game out of reach.

On the night, Campbell recorded his first double-double of the season – with zero turnovers to boot.

“It’s really a treat when you have someone who can handle the ball and find teammates and create for himself as well,” Bernard said. “We have a lot of talent, and having him at the head is amazing.”

UCLA shot 14-of-32 from deep, with Bernard hitting four on seven tries. He tied a season-high in scoring with 22 points, which he set against the Beach in the schools’ first meeting Nov. 15.

After the final buzzer had sounded, the family members that were in attendance headed up towards the exits, without “Hail to the Hills of Westwood,” playing in the background.

A Pauley Pavilion custom to play the alma mater of UCLA at each game’s conclusion, the Bruin faithful will have to wait at least until next week’s home contest versus Oregon on Jan. 13 before they can sing along again.