By Sydney Kovach and Laila Wheeler 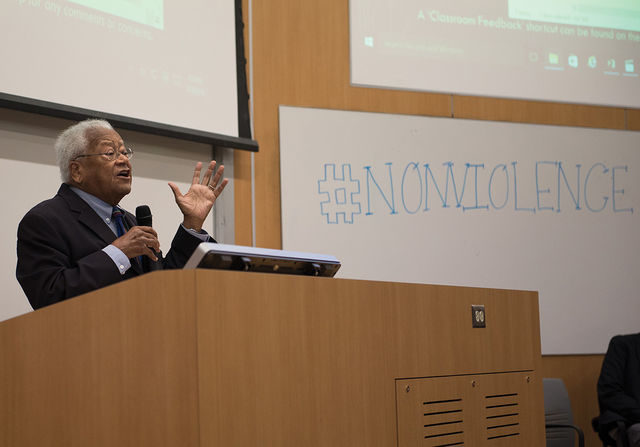 The downtown location of the UCLA Labor Center was renamed to honor Reverend James Lawson, a leader of the civil rights movement and a UCLA labor studies faculty member, as a part of an effort to renovate the labor center. (Daily Bruin file photo)

Renaming the center after Lawson, a UCLA medal recipient, is part of a larger effort to renovate the labor center through a one-time allocation of $15 million in California’s 2021-2022 state budget.

Before coming to UCLA, Tobias Higbie, the faculty chair of the Labor Studies program, said he was familiar with Lawson’s role as an organizational director in the Memphis sanitation strike of 1968. Higbie said he has looked up to Lawson’s character and work for years, stating that Lawson consistently pushes his allies to improve and advocate for change.

“Rev. Lawson is somebody who really has an inspiring message about the value of every human being and why that requires us to work for social justice,” Higbie said.

Higbie added that the event to honor Lawson was the first time the center has been open since the beginning of the COVID-19 pandemic.

“It’s one location that we’ve been unable to go to for the last two years during the pandemic,” Higbie said. “We’ve been cut off from … (the location) we’ve used for 20 years to connect to the community.”

The UCLA Institute on Research and Labor and Employment, which houses labor studies, recently added a new labor studies major, which provides career opportunities for students aspiring to become more knowledgeable in the field.

Natalia Lopez, a third-year labor studies student, said she came to UCLA unsure of what she would major in but – after taking a few courses in the labor studies department – she discovered that she is passionate about labor issues, which influenced her drive to become an activist.

“(Labor studies courses) talked a lot about the struggles of labor workers and the importance of making people aware of these issues and the injustice that goes on in the workforce,” Lopez said. “I feel like it’s essential that all students should be required to take a course in labor studies because it does make you aware of issues that people may not have thought of.”

Higbie added that former California Gov. Arnold Schwarzenegger’s administration pushed to fully defund the programs at the UCLA Labor Center, so the university’s recommitment to the Labor Center excites him.

“We’re … thinking about the possibilities of a university that does engage the full public and seeks to leverage the resources of the state,” Higbie said. “It’s a very exciting thing. I mean, those are the reasons why I became a professor and wanted to work in a public university.”

Higbie said the university’s financial recommitment to the center’s programs will help further its efforts toward equity, adding that Lawson’s decadeslong experience of using nonviolent activism to push for change embodies the center’s work towards justice.

“I recall him urging … the university or political leaders toward doing better. And, of course, we all sometimes need that kind of encouragement,” Higbie said.

Kovach is the 2021-2022 assistant News editor for the campus politics beat. She was previously a contributor for The Stack. Kovach is a fourth-year global studies student at UCLA.