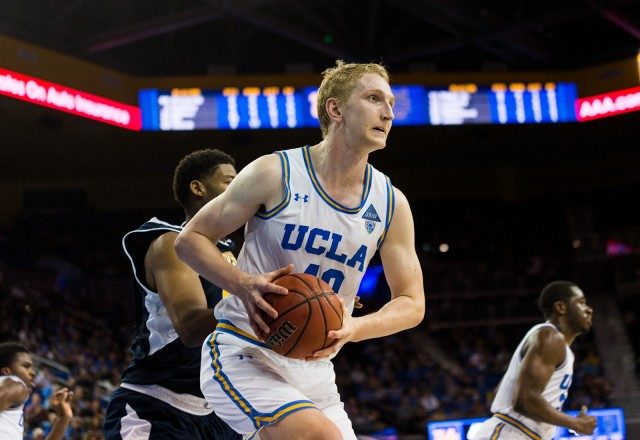 Sports are in full swing all year long – from the prep level to the professional ranks. Each Monday, Daily Bruin Sports will highlight a few moments from former UCLA greats over the past week.

Years after his collegiate career on the West Coast, Thomas Welsh has found a home in East Asia.

The New Taipei Kings center was named the P.LEAGUE+ MVP for the month of December on Friday.

Welsh – who played for UCLA men’s basketball from 2014 to 2018 – averaged 21.7 points, 20 rebounds and 4.7 blocks per game for the Kings in December. Despite missing the team’s final two contests of the month because of injury, Welsh still claimed the December award.

The center is one of three import or foreign players for New Taipei, an expansion team in the P.LEAGUE+ this season. In his team’s first match versus the Formosa Taishin Dreamers on Dec. 11, Welsh poured in 14 points, nabbed a team-high 28 rebounds and blocked six shots in the victory.

Welsh’s stint with the Kings comes after a brief journey in the NBA and the highest tier of Belgian professional basketball after leaving Westwood. Drafted 58th overall by the Denver Nuggets out of UCLA in the 2018 NBA Draft, the P.LEAGUE+ marks the center’s fourth league in the last three and a half years.

From winning a high school state championship to finishing third all time in kills for UCLA women’s volleyball, Mac May holds a long list of accomplishments.

Now, the former Bruin outside hitter/opposite can add a professional contract to her career accolades.

Volley Bergamo 1991, an Italian women’s volleyball club, announced May’s signing in a press release Tuesday. Fewer than four weeks removed from her last match with the Bruins, May is slated to play for the professional club once she passes the necessary medical examinations and health checks to train, according to a team announcement.

Bergamo currently sits in 10th place in the Serie A1 – the top tier of professional women’s volleyball in Italy. May’s signing comes amid the league’s winter break, with the team scheduled to return to action against Savino Del Bene Scandicci on Sunday.

May finished her five-year career with the blue and gold with 2,065 kills and 178 service aces – both good for third most in UCLA women’s volleyball history. May also spent time on the Bruin beach volleyball squad, playing on the 2018 and 2019 championship-winning teams.

The UCLA men’s tennis player from 2015 to 2019 reached the final after not being in the main draw for the tournament. Defeating two straight opponents in the qualifiers, Cressy advanced through four more rounds, including an upset win over No. 28-ranked Grigor Dimitrov in the semifinals.

Cressy nearly took the opening frame versus Nadal, holding a set point in the tiebreaker before falling in straight sets. Despite the loss, the former NCAA men’s doubles champion broke through to a top-100 ATP singles ranking after sitting at No. 112 prior to the tournament.