Protesters gather on Wilshire in response to Russian invasion of Ukraine 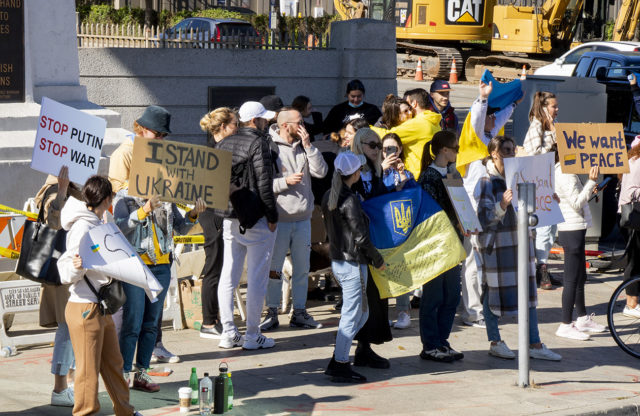 Dozens of protestors gathered outside the Wilshire Federal Building at Wilshire Boulevard and Veteran Avenue with signs denouncing the Russian invasion of Ukraine. (Finn Chitwood/Daily Bruin)

Correction: The original version of this article misspelled Vladimir Putin’s name in a sentence.

Dozens of protesters gathered outside the Wilshire Federal Building on Thursday to express concerns about the U.S. response to the Russian attack on Ukraine.

According to Reuters, Russian President Vladimir Putin declared war on Ukraine, authorizing what he called “a special military operation” early Thursday. Forces clashed at the Chernobyl ex-nuclear power plant and at an airport close to Kyiv, the Ukrainian capital.

Around 1 p.m., protesters spoke out against the Russian invasion of Ukraine as they stood at the corner of Veteran Avenue and Wilshire Boulevard, demanding that the war must be stopped.

Several protesters waved signs at the intersection, including those that read “Ukrainian and Proud,” “I stand with Ukraine” and “Stop war in Ukraine.”

Some protesters chanted slogans in Ukrainian, supporting the nation.

Isabel Zabryanskiy, a third-year civil engineering student, said she came out to the protest to support her family in Ukraine.

Zabryanskiy added that Russia’s invasion of Ukraine was not surprising, given Putin’s agenda regarding Ukraine and historical Ukrainian-Russian relations.

“When I heard that he was stationing troops near Ukraine, it wasn’t a shock. I was hoping that this was a bluff. But also, I’m not surprised that this was a time when it happened,” said Alexandra Grishchenko, a third-year chemical engineering student.

Anastasiia Zahrai, a protester at the scene, said she also has family and friends in Ukraine and attended the protest to raise awareness for the country.

“When people are honking, it feels so great because I feel the support, and I feel like we are being heard,” Zahrai said.

According to CNN, Russian forces seized a Ukrainian airbase near the nation’s capital, Ukrainian officials confirmed that more than 40 soldiers have been killed since the Russian invasion began, and U.S. President Joe Biden announced sanctions against Russia on Thursday.

Oruganti was the 2021-2022 city and crime editor. He was also the 2020-2021 Enterprise editor and a News staff writer in the City & Crime and Science & Health beats 2020. He was also a fourth-year cognitive science student at UCLA.