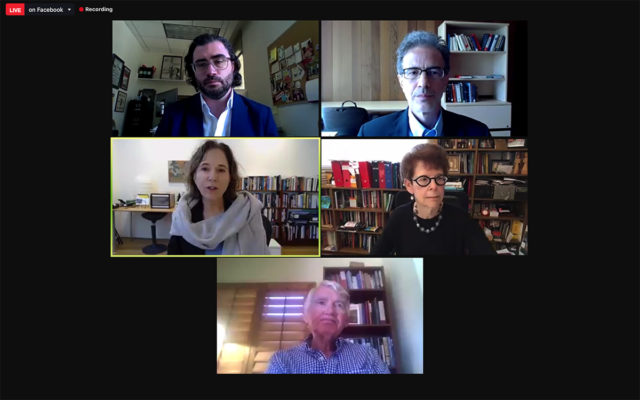 A Zoom panel of professors sponsored by two university centers discussed the current war in Ukraine, which began with a Russian invasion of the country Feb. 24. Thousands of troops and civilians have been reported wounded or dead in the first week of the conflict. (Screen capture by Justin Jung/Daily Bruin senior staff)

UCLA professors discussed the war and humanitarian crisis in Ukraine and potential de-escalation efforts in a webinar Tuesday afternoon.

On Feb. 24, the Russian military began its invasion of Ukraine and has since sent troops from the Russian border, Belarus and Crimea – a former Ukrainian territory it annexed in 2014. As of Tuesday, more than 350 civilians have been killed, according to Al Jazeera.

[Related: Protesters gather on Wilshire in response to Russian invasion of Ukraine]

At the beginning of the event, McBride acknowledged the pain and trauma associated with the war and extended support to community members affected by it. He said he hopes UCLA will support Ukrainian colleagues, citizens and impacted individuals.

The war is causing a mass humanitarian crisis, with many civilians and workers in the region unable to leave or get in touch with their families, McBride said. Around 600,000 refugees have already left Ukraine’s borders, he added.

McBride also discussed the strength of Ukrainian resistance efforts and the possibility of a Ukrainian insurgency due to destabilization caused by the armed conflict.

Treisman said he thinks Russian President Vladimir Putin miscalculated on three main fronts when planning the invasion: the strength of Ukrainian resistance and defense, the strong reaction of Western countries and the anti-war sentiment within Russia.

The United States and European countries have implemented economic sanctions against Russia, targeting Putin and foreign minister Sergey Lavrov, according to The Associated Press.

However, opposition within Russia, the Ukrainian military and the West may not immediately end the armed conflict in Ukraine given Russia’s military capacity, Treisman added.

Mann discussed historical examples of what he called revisionist wars and connected them to Russia’s war in Ukraine. Revisionist wars are armed conflicts in which countries aim to take territory they believe they should own but were wrongfully taken from them in the past, he explained.

Additionally, imperialist powers often struggle to install new leadership, and lingering nationalism stokes insurgency and instability, Mann said. Thus, the war will be devastating for civilians, with more civilian casualties regardless of whether or not Russia meets its objectives in Ukraine, he added.

Audience members asked the expert panelists questions about the history of separatist groups in the region, Putin’s timing and planning of the invasion, the role of the media and propaganda and potential for de-escalation.

Amid the great deal of uncertainty surrounding the conflict, a quick diplomatic solution is unlikely, multiple speakers said.

“Deals that Putin might commit himself to will not be worth very much because he’s broken all the previous treaties and deals,” Treisman said. “So even if the Ukrainians wanted to negotiate something, … he doesn’t have any credibility. So how would it be enforced?”