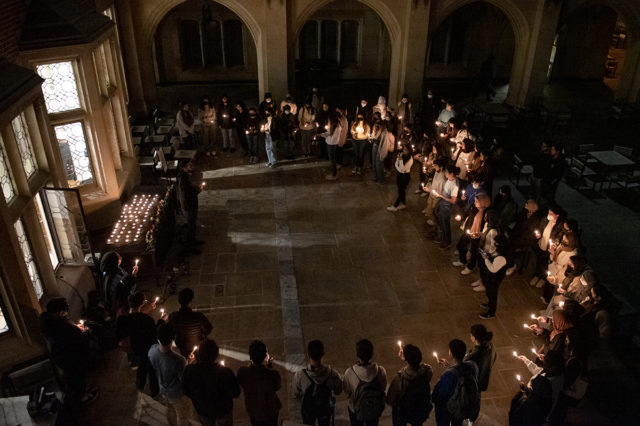 Editor’s note: The terms “Shia” and “Shiite” are used interchangeably based on sources’ preferences.

Dozens gathered in a vigil Monday in remembrance of the victims of the recent Islamic State affiliate attack in Peshawar, Pakistan.

On March 4, an IS suicide bomber opened fire and set off explosives in a Shiite mosque during the morning prayers, according to The New York Times. At least 63 people have died and almost 200 were wounded as of March 5, according to The Times.

The Muslim Student Association organized the vigil to show solidarity for Shiite Muslims, spread awareness about the attack and condemn the violence, said Mohammed Mortada, the MSA Shia student representative and a fourth-year political science student.

Students attended the vigil to show respect and offer prayers for the victims.

“This is the fifth attack on a Friday prayer in a Shia mosque in 2022 alone,” he said.

Shia Muslims are often targeted simply because of their Shia identity, he said. In Pakistan, there is a graveyard that has hundreds of graves marked with red flags to signify the people who were killed for being Shia, he added.

Since her parents are Pakistani, the attack hit close to home, said Ayesha Aslam-Mir, a second-year pre-human biology and society student. She said it was important to show up as a community to support the victims.

“It’s a tragedy that strikes all of our hearts,” she said.

Khalil Dewji, the president of the Shia Muslim Council of Southern California, spoke at the vigil and called on the government of Pakistan to apprehend those who organized and supported the attack. Dewji also denounced acts of violence, especially against those who are in the midst of praying or worship.

Unfortunately, acts of terrorism have become the norm, he said, with attacks on synagogues and churches occurring around the world, including in the United States.

“It’s really important to show solidarity with minorities of any kind,” said Maham Khawar, a third-year cognitive science student who attended the event.

Khawar’s relatives live near the location of the attack, so she said it was important for her to show her support and respect. Khawar added that small actions can make a positive difference.

“There’s power in numbers,” she said.