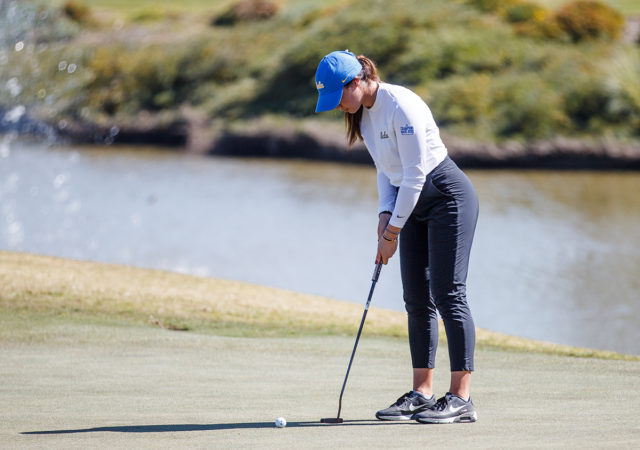 Redshirt freshman Alessia Nobilio finished with a tie for third as No. 12 UCLA women’s golf picked up a fourth-place team finish at the Pac-12 championships. (Joseph Jimenez/Daily Bruin)

Alessia Nobilio entered the final round in sixth place individually, on par through two days of play.

But two holes into round three, the redshirt freshman suddenly found herself 3 over par.

“I was sad and upset after that start, but I knew that my game was good this week,” Nobilio said.

Nobilio proceeded to land two birdies between the next four holes, eventually climbing three places in the rankings and finishing with a 1-over 217 across three days of competition.

Nobilio’s third-place-tying performance led No. 12 UCLA women’s golf to a fourth-place team finish at the Pac-12 championships in Eugene. The three-day competition concluded Wednesday despite a weather-related delay in play in the second round, and No. 2 Oregon ultimately claimed the conference title on its home course.

With an average of about 35 rainy days per year in Los Angeles, the Bruins were slightly out of their element in the inclement weather, according to coach Carrie Forsyth.

But given UCLA’s recent road trip to the Pacific Northwest for the Chambers Bay Invitational prior to the beginning of the postseason, Forsyth said the Bruins were as prepared as possible.

“Overall, I’m really happy that we were able to move up (Wednesday),” Forsyth said. “It was a good round. It rained all day, so it was really difficult conditions, and the girls just, they hung in there, and I feel like we’re trending in the right direction.”

On the first day of play, redshirt sophomore Ty Akabane shot a 7-over 79 and was replaced the following day by freshman Zoe Antoinette Campos. According to Forsyth, UCLA had initially planned to return Akabane to play after a one-day break, but the rainy weather and subsequent lack of practice kept Campos on the course.

After her initial 4-over 76 on Monday set her back at a tie for 31st place, junior Emilie Paltrinieri proceeded to shoot rounds of 71 and 73 to finish second among the Bruins. Paltrinieri left Oregon tied for ninth individually amid the Pac-12 competition.

Forsyth said Paltrinieri has started to find her groove again.

After landing in a fifth-place tie Monday courtesy of an even-par performance, freshman Caroline Canales shot two straight rounds of 3-over 75 to push her down the rankings and finish the tournament tied for 19th place.

With three freshmen representing the blue and gold in Eugene, Paltrinieri said the young Bruins have made a sizable impact.

“They’ve (the freshmen have) helped us a lot,” Paltrinieri said. “Getting a few freshmen who are such good players obviously helped us believe more in our capabilities and also achieve better results.”

Coming off her third career tournament win the week prior, junior Emma Spitz began the tournament tied for 31st in the pool of more than 50 individuals. Spitz improved with a 1-over 73 on Tuesday, but the junior’s 3-over 75 on Wednesday put her in a 26th-place tie by the end of the tournament.

Despite finishing fourth among the Bruins in the tournament, Spitz was the only UCLA athlete to make the Pac-12 All-Conference Team – the second such honor of the junior’s career.

Following their showing at the Pac-12 championships, the Bruins will continue the postseason at the NCAA regionals beginning May 9.