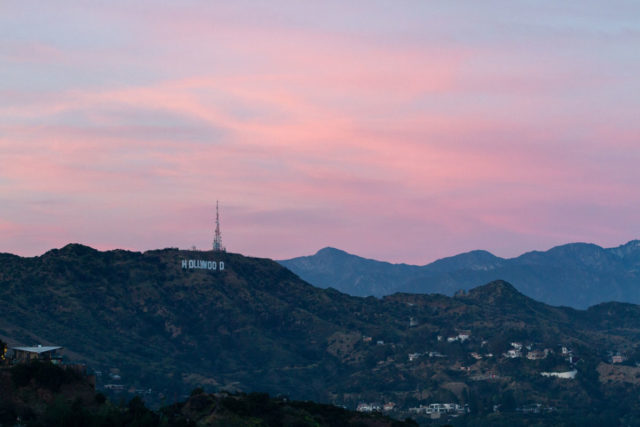 The Hollywood sign overlooks the Hollywood area of Los Angeles. A UCLA report analyzing diversity among actors and staff in Hollywood has been criticized for not considering disabilities or LGBTQ+ identities. (Tanmay Shankar/Daily Bruin senior staff)

Advocates and UCLA faculty addressed criticisms of a UCLA report for not analyzing disability and LGBTQ+ representation in the film and television industry.

The 2022 Hollywood Diversity Report Part 1: Film, released March 24, analyzed the relationship between racial and gender diversity and net profits in the film industry. Darnell Hunt, co-author of the report and dean of social sciences at UCLA, said the report used statistics from surveyed ticket buyers and household demographics. Beginning in 2020, researchers split the report into two sections – film and television – to make the data more digestible, he added.

A March 30 letter from FWD-Doc, an organization seeking to improve representation, employment and opportunity for disabled, deaf and neurodiverse filmmakers, expressed criticism of the report’s lack of including data on those who identify as disabled or LGBTQ+.

Judith Heumann, the lead author of the Ford Foundation’s Road Map for Inclusion – a report that explained ways to address the exclusion of disabled Americans in the film and television industry – said the failure to include disabilities and LGBTQ+ identities in the diversity report showed a lack of understanding about representation.

“It just, to me, was heartbreaking and made me really feel like the changes that I would like to have seen haven’t really happened yet,” Heumann said.

Jim LeBrecht, the co-founder of FWD-Doc, said he would have appreciated if the report explained the reasoning for its narrow context and methodology.

Researchers could not verify LGBTQ+ identities or disability status as they do with race and gender statistics because people from these communities do not always self-identify, Hunt said. He added that studios and networks would need to begin collecting this information for the report to accurately include these communities.

Hunt said the report should have mentioned its limited scope of race and gender and that other identities would be considered as more data become available.

He added that researchers are considering renaming the report to reflect its focus on race and gender.

The report has received these criticisms before, Hunt said, adding that he has been exploring ways to collaborate with organizations such as GLAAD to share data and promote each other’s reports. GLAAD has produced a “Where We are on TV” report analyzing representation on screen for LGBTQ+ characters since 2005 and characters with disabilities since 2010. The Hollywood Diversity Report instead focuses on identities of actors or those working behind the scenes, Hunt said.

LeBrecht said the disabled community remains underrepresented in the media. Having representation for people who are deaf, disabled or neurodiverse on camera as well as in production positions is equally important, he said. Heumann said people who are disabled and LGBTQ+ also exist within the communities of color studied by the report.

“There really needs to be a serious look at all of these organizations that supported this to ask the question, ‘Why are Latinx disabled people not a part of this? Why are whatever a part of this? And why didn’t we notice it?’” she said.

“I doubt that there are many transgender people of color that are running networks or studios or production companies,” Griffiths said. “And why is that the case still? That’s why we do need these reports.”