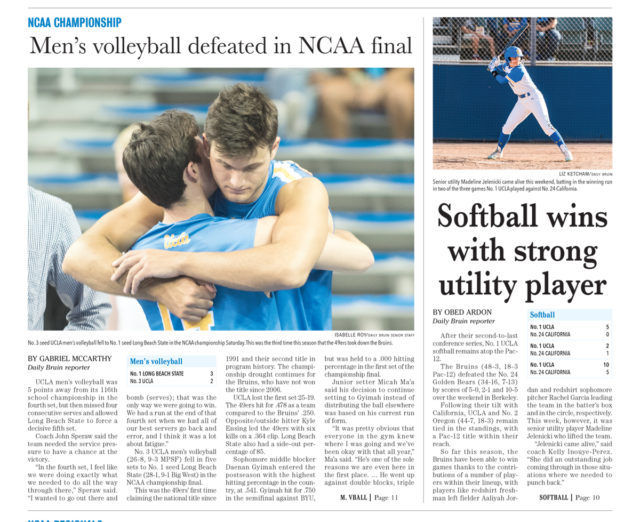 Four years ago to the date, UCLA men’s volleyball took on then-No. 1 seed Long Beach State in the 2018 National Collegiate Men’s Volleyball Championship in Pauley Pavilion. After more than 160 minutes of play, the Bruins blew a 2-1 lead, dropping a fifth-set tiebreaker decided by three points.

At the time, both teams were looking to end title droughts spanning longer than a decade. The Bruins sought to snap a 12-year spell, and the Beach – then known as the 49ers – sought a return to glory for the first time in nearly 30 years.

UCLA extended its chase of its 20th national championship with the loss, and Long Beach State began a stretch of back-to-back titles only interrupted by the COVID-19 pandemic-shortened 2020 season.

“Once you make (the) playoffs, you really never know what is going to happen,” said outside hitter Dylan Missry, following his team’s 2018 championship final defeat.

In the fourth frame of the 2018 tournament final, a kill from middle blocker Daenan Gyimah over three Beach blockers knotted the score at 20-all and returned possession to the Bruins. By the end of the contest, Gyimah tallied a match-high 21 kills on a .375 hitting percentage.

“He’s one of the sole reasons we are even here in the first place,” Ma’a said.

Up two sets to none with five points separating it from victory, UCLA put in opposite/outside hitter Grant Maleski – a serving specialist.

Maleski, a then-freshman on a team featuring four senior starters, had been in the match to serve twice before. With 7,248 spectators in attendance, Maleski swung for the stands, only to have the ball hit the net and for him to collect his second service error of the contest.

Coach John Speraw, a staunch supporter of aggressive serving, said his team’s strategy was to put pressure on the Beach.

Maleski’s misfire led to a string of Bruin service errors. Gyimah, Missry and opposite Christian Hessenauer – three of UCLA’s four top servers in terms of service aces – all failed to serve the ball in play en route to a Long Beach State set point.

With the score tied at 24-all, middle blocker Oliver Martin broke the Bruins’ streak of service errors just to send it straight to libero Jordan Molina for the Beach to score set point.

The Bruins were outserved by the Beach, tallying seven more service errors and two fewer aces. Ma’a nabbed one of those service errors to open the fifth set en route to a 15-12 UCLA defeat.

Now, the blue and gold will have the chance to reverse the script when it faces Long Beach State in the 2022 NCAA semifinals at Pauley Pavilion.

Thursday’s semifinal contest will be the rubber match for the two teams, a series in which UCLA has committed more service errors than Long Beach State.

The Bruins will be looking to repeat history from years past, but their service error history is one they will look to avoid.