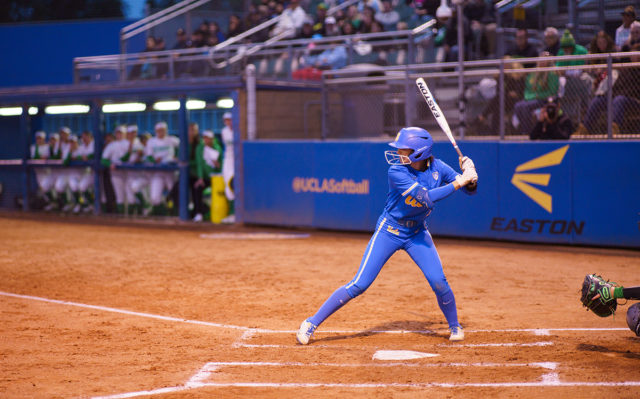 UCLA players and coaches were not immediately available for interviews.

In a rubber match to decide the top of the Pac-12 standings, the Bruins lost in walk-off fashion.

No. 4 UCLA softball (40-8, 16-5 Pac-12) split its first two contests with No. 12 Arizona State (37-8, 18-3) on Friday and Saturday before losing Sunday’s matchup 6-3 in Tempe on a seventh-inning walk-off home run. With the loss, the Bruins now sit two games behind the Sun Devils for the Pac-12 crown, with three games remaining on their conference schedule.

While UCLA held a 3-0 lead in the sixth inning, Arizona State loaded the bases with no outs.

Redshirt junior pitcher/first baseman Megan Faraimo proceeded to strike out the next two batters. However, the following Sun Devil batter, infielder Bella Loomis, tied the game with a bases-clearing double.

In the bottom of the seventh, with the score still knotted at 3-3, outfielder Emily Cazares ended things with a three-run walk-off home run to lift Arizona State to victory.

The blue and gold broke Sunday’s deadlock in the fourth frame. After consecutive singles and a groundout moved both runners into scoring position, redshirt sophomore utility Seneca Curo hit a bases-clearing single into center. Redshirt senior infielder Delanie Wisz added to the lead with her second solo home run in as many days.

But Arizona State scored the next six runs in the final two innings on the double and home run to reign victorious for the second time over the weekend.

UCLA dropped the matchup Friday 6-1, losing its first series opener of the season and losing consecutive games for the second time on the year. The blue and gold recorded six hits compared to Arizona State’s 10, which included three home runs.

On Saturday, the script was reversed as the Bruins managed double-digit hits while the Sun Devils were held to three. In the first inning, the first four blue and gold batters all reached base as UCLA jumped out to a 4-0 lead on RBIs from Wisz, redshirt sophomore catcher/first baseman Alyssa Garcia and redshirt junior utility Anna Vines.

Nearly two weeks prior, Perez became the fourth Bruin ever to record 300 hits in a blue-and-gold uniform.

After the Sun Devils scored three unanswered runs to close the gap, the Bruins opened up another four-run inning in the fourth. Perez and Wisz went back to back, with the former smashing a three-run home run to right field before the latter hit a solo shot into the left.

From there, UCLA added one more run en route to a 9-3 win to even the series.

With the series loss in the books, the Bruins will return home for their last three-game slate of the regular season.

Farinha is currently a Sports staffer on the softball beat. He was previously a reporter on the women's soccer beat.