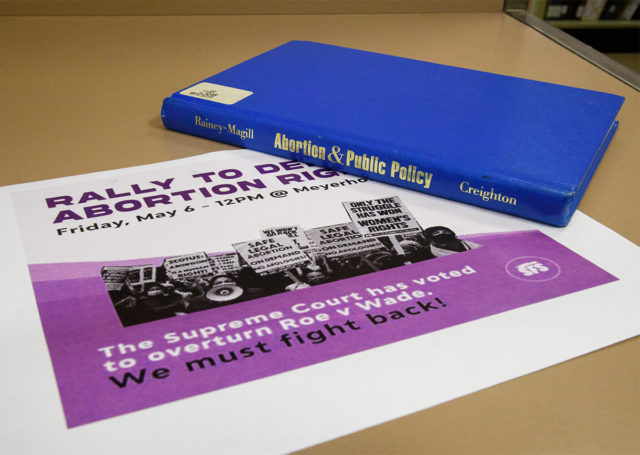 According to the draft opinion leaked May 2, the legality of abortion would be decided by individual states in the case that Roe v. Wade – a 1973 case that upholds a woman’s right to abortion because of a right to privacy – is overturned.

Trinity Hall, a second-year political science student, said she was overcome with emotion when she learned of the leak. Hall said that although California is currently governed by politicians who support abortion rights, she is concerned about the consequences should that change. She added that this decision would disproportionately affect people of color in other states.

Hall said their pro-abortion rights stance is grounded in their belief that society should prioritize the well-being of those who are already born.

Sandra Karen, a third-year physics student, said she is pro-abortion rights, adding that many often claim abortion is murder because they consider fetuses to be people. Karen said this claim should be challenged, asking why a fetus should be treated as a person.

Daniel Baker, a second-year cognitive science student, said he believes life starts at conception. As a Catholic, he said that for other people, drawing the line for where life begins can be arbitrary but from his point of view, it’s simple.

Baker added that women’s choices have been suppressed for far too long. However, saving a human being’s life has to surpass the importance of women’s choices, he said.

Alan Parker, a third-year Latin language and culture student, said he also considers abortion to be murder but does not consider the woman the murderer.

“I think they’re (women are) victims to this situation just as much as the child is,” Parker said.

Parker, a member of Live Action UCLA – a nonpartisan anti-abortion organization – also said abortion should not be a state issue but a federal one. He added that there should be a constitutional amendment in place to protect life at all stages.

Both Baker and Hall said they disapproved of the draft being leaked in the first place.

Baker said the leak damages the integrity of the Supreme Court as an institution. Hall additionally said their faith in the court has been completely lost because of the incident.

Baker also said he has noticed the civility during conversations with students on Bruinwalk.

In addition, Karen said it is important to be open to conversation on the topic, regardless of one’s personal beliefs.

“The only way that people can enshrine abortion rights is by convincing those who don’t believe in them,” Karen said. “So just always keep talking to those people. Always try to understand where they’re coming from, and then specifically address those views and try to explain why you believe different and why you think you’re right.”