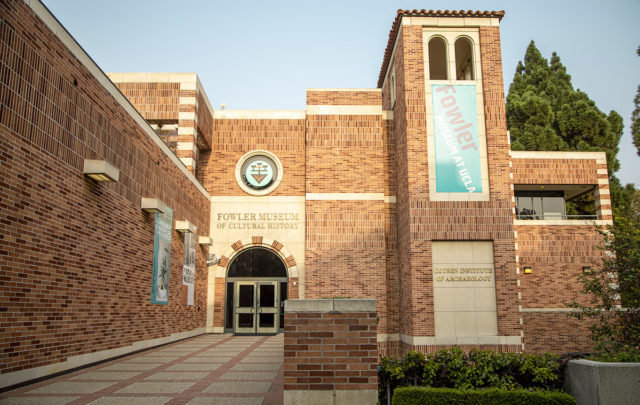 The Fowler Museum's Fowler Out Loud event series will return for its second in-person iteration since the start of the COVID-19 pandemic. Rebecca De La O will perform an act that combines dance, acting and economics Thursday. (Justin Jung/Daily Bruin senior staff)

Rebecca De La O is closing out her undergraduate experience with a bow.

The fourth-year economics student will be performing an interactive dance for 2022’s second installment of the Fowler Museum’s Fowler Out Loud series on Thursday. De La O said this performance represents a culmination of her work both in and out of the classroom, and she wants to present all these takeaways in a unified, thematic manner. From confronting and overcoming impostor syndrome to learning to sometimes let go of control, she said she wants to honor the life lessons and intersections within her life – from dance to economics.

“I’m going to be both a dancer and an actor,” De La O said. “There’s also going to be pieces where there are more interactive elements involved. It definitely hopes to garner an engaged audience.”

When she first came to UCLA, she initially felt out of place in the dance community because she did not pursue the art in any formal capacity prior to college, De La O said.

She said the lack of beginner dance classes for students new to formal training was discouraging until she discovered UCLA’s Grupo Folklórico. Performing traditional Mexican dances alongside other people who enjoyed moving reignited her zeal for dance, which endured during the pandemic and is now being channeled into her Fowler Out Loud performance, she said.

“I realized dance is more than looking great,” De La O said. “It’s a feeling. Once I can connect with that feeling, with the music and with the energy, there’s no impostor syndrome anymore because I am fully trusting myself, and I’m present.”

Fowler Out Loud coordinator and first-year dance student Sydney Richardson said a friend in her dance department recommended that she reach out to De La O for a possible performance because of the way she combines dance with the everyday reflections of a college student. Richardson said De La O plans for the performance to be intimate – set in a small courtyard in the Fowler Museum that heightens the audience’s sense of connection with the performer.

Though her story depicts the college experience through an individual’s eyes, De La O said the performance will still be indicative of an underlying collective story at play. She plans to incorporate dance styles from different cultures that she has been exposed to while at college – from traditional Mexican dance to dances performed in West Africa. Each style of dance has impacted her sense of self differently, she said, and with West African dance, for instance, teaching her to worry less about how she looks and more about how movement makes her feel.

One of De La O’s biggest advocates for her studies and a close witness of her personal growth during her time at UCLA has been Chris Surro, an assistant adjunct professor of economics. Within the traditionally rigid structure of the economics major, he tries to emphasize the idea that it is impossible to know and understand everything, Surro said. After De La O came to terms with this lesson, he said she was able to embrace not always having all the answers, an important revelation for battling impostor syndrome, which De La O dealt with while planning this performance.

“In that development of economics, the impostor syndrome is a reflection,” Surro said. “People may seem like an expert on issues, but I think when you pull back a little bit, you’re like, ‘OK, they know a lot about this one specific thing, but they don’t know much about really what’s going on in the world as a whole.'”

In preparing for the performance, De La O said the bulk of her plans and choreography come from extended time spent daydreaming while doing chores or falling asleep. Visualization is more important than writing anything down on paper, she said, because imagination enables her to dream up whatever she pleases and she then challenges herself to make it a reality.

“Everyone has their own individual story, and that individual perspective is all they know, but I also think people would be amazed to find how many parallels and shared experiences there are amongst the collective story,” De La O said.