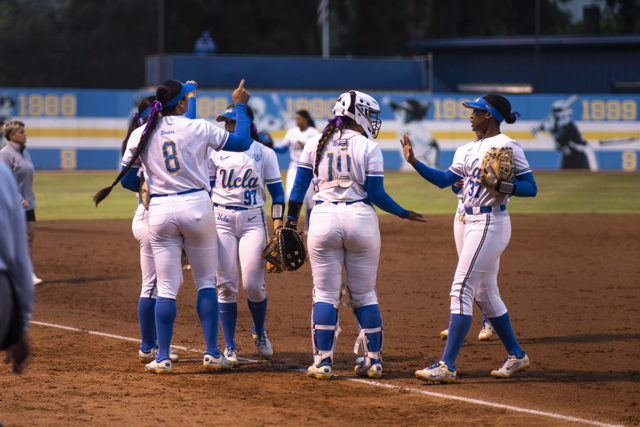 Members of No. 6 UCLA softball congregate along the third base line. The Bruins have split their last four series. (Patrick Shao/Daily Bruin)

Over the past month, the Bruins have lost five of their last 11 Pac-12 outings.

Coach Kelly Inouye-Perez said the past up-and-down month has provided the team with learning experiences as it enters the postseason.

“Everything we do during Pac is an opportunity to learn.” Inouye-Perez said.

After losing a pair of contests in Tempe, No. 6 UCLA softball (40-8, 16-5 Pac-12) sits two games behind Arizona State for first place in the conference. Five of the Bruins’ eight losses this season have come at the hands of ranked opponents, and both the number of total and conference defeats are the most the team has had since 2017.

“Not only this last weekend, but I think every weekend that has passed so far, we’ve been tested,” said redshirt senior infielder Delanie Wisz. “In postseason, we’re going to be tested with a lot of different opponents.”

UCLA began Pac-12 play by sweeping Arizona, Washington and Oregon, a feat that had not been accomplished in the 21st century. The blue and gold has since split its last four series, losing to Stanford and Arizona State while downing Oregon State and Utah.

Despite the nine-run showing in Saturday’s win over the Sun Devils, the Bruins have failed to score more than three runs in five out of the last six games and have hit over .300 as a team twice in the past 14 conference matchups.

Inouye-Perez said while more scoring is always a welcome sight, her team needs to lock-in defensively to be successful in the postseason.

“I could always ask for more runs on the board, but defense wins championships,” Inouye-Perez said. “We didn’t get it done to win the game on Sunday. … We need both to come together. You got to play offense, you got to play defense. And those are just great opportunities for learning about what we need to do going into the postseason.”

Part of the preparation for the postseason is playing in front of large crowds, something that was missing from last season. This year, the Bruins have had fans in the stands at Easton Stadium while also playing in hostile environments.

“Last year, we were still in COVID protocols in LA, so we didn’t have a lot of big atmosphere games,” Inouye-Perez said. “So going into postseason, it was different. This year you know, we’re getting atmosphere in a lot of places. In Washington, the atmosphere was pretty intense, even Oregon State didn’t have as many but there was a good atmosphere and good games.”

UCLA has three games against California remaining on its regular season schedule.

Redshirt senior infielder Briana Perez – who will be celebrated as a graduating senior over the weekend – said she’s looking forward to wrapping up the regular season at home.

Farinha is currently a Sports staffer on the softball beat. He was previously a reporter on the women's soccer beat.