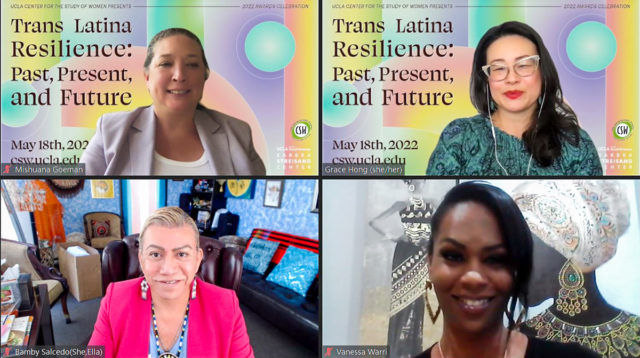 The UCLA Center for the Study of Women hosted its annual event honoring this year’s recipient of the Distinguished Leader in Feminism Award in a webinar May 18.

The Distinguished Leader in Feminism Award honors exemplary individuals who have advanced equality and gender justice. This year’s award recipient is Bamby Salcedo, the president and CEO of the [email protected] Coalition – an organization advocating for transgender Latinas in the United States.

Mishuana Goeman, the associate director of the Center for the Study of Women, said Salcedo received the award in part because of her creation of the Center for Violence Prevention and Transgender Wellness, a service from the coalition providing several resources – including case management services, victim accompaniment and transportation – to trans, gender-nonconforming and intersex individuals.

“Her remarkable and wide-ranging activist work has brought voice and visibility to the trans community and many overlapping communities and issues such as immigrants, HIV, youth, incarcerated (communities) … even when there was none,” Goeman said.

The coalition provides support for basic needs such as food, housing and employment through its base in Los Angeles, Salcedo said. She added that they have worked to advocate for policy changes as well, including the passage of AB 2218. The bill, signed by California Gov. Gavin Newsom on Sept. 26, created the Transgender and Wellness Equity Fund, allocating $15 million for medical and mental health support for transgender, gender-nonconforming and intersex people.

The event, which started at noon, featured a keynote address from Salcedo on her organization’s work and the resilience of the trans Latina community.

Salcedo said she appreciated being honored in a women-specific space such as the center, adding that many trans women are not acknowledged in these spaces. Her ability to turn her experiences as a trans Latina into opportunities for herself is a privilege many do not have, she added.

“I am the CEO of a national advocacy organization,” she said. “But my definition of the CEO is community-elevated officer.”

Salcedo also spoke about how she has remained resilient in the face of marginalization and oppression.

She said her spirituality supports her in her advocacy work, adding that she comes from a lineage of people who practice resistance through their spirituality.

“I had the same issues that trans people and trans Latinx individuals are experiencing today, and so it’s important for us to recognize that,” she said. “And that is why the [email protected] Coalition has been influential to the broader trans movement and to making sure that we, as an organization, not just resist but that we also create alternative lives for all of us.”

The webinar also featured a conversation between Salcedo and Vanessa Warri, a social welfare graduate student working at the Luskin School of Public Affairs to research the social determinants of health for Black transgender and gender-diverse populations.

Both Salcedo and Warri spoke about their experiences as trans women of color, adding that they were greatly influenced by Sylvia Rivera, an activist for the rights of trans people of color who fought against the marginalization of queer people of color within the gay rights movement. Rivera also participated in the Stonewall uprising of 1969, a response to the police harassment and social discrimination facing many gay bars in the 1960s.

“All of us have been able to learn from her (Rivera), to learn from her resiliency. … (She) taught us that despite of the marginalization and the oppression that we experienced as trans Latinx individuals or trans Latinas we can still overcome if we understand that we do have power,” Salcedo said.

The academic community has also been transactional and harmful toward trans communities of color, Warri said.

Salcedo, who received a master’s in Mexican and Latinx studies from California State University, LA, said that she had people supporting her during her studies, but the space was often isolating. She was the only openly identified trans person in her courses.

At the same time, the coalition and other academics have been able to collaborate for meaningful research, Salcedo said.

The coalition developed a report in 2013 with Karla Padrón, an American studies graduate student at the University of Minnesota, Twin Cities, on the social and legal barriers trans Latina immigrants face. They have also collaborated with Jack Caraves, then a doctoral student in Chicana and Chicano studies at UCLA, in producing a 2016 report on the specific medical needs of trans Latinx people in California.

Departments should be purposeful in creating space for trans women to participate in academia, Salcedo said, adding that the individuals who hold power in academic spaces should support them through research and terminology.

“I think it’s important for us to create paths that will support our community to get from point A to point Z,” she said. “And we need to be intentional and really invest in the lives of our community.”