By Emily MacInnis and Shaanth Kodialam 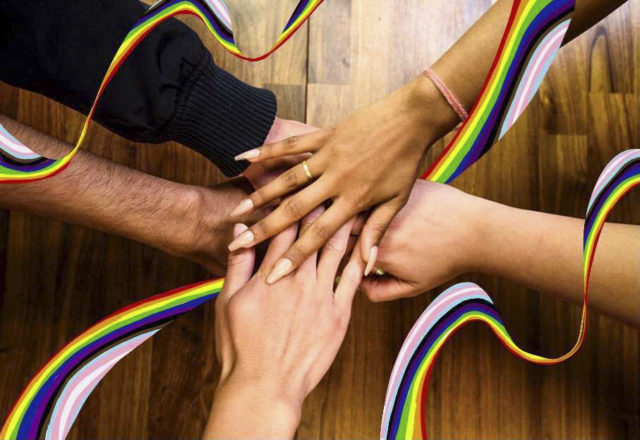 Several hands join together surrounded by the colors of the progress pride flag. The Queer, Trans, Black, People of Color Student Experiences Project — now in its second iteration — continues to capture the narratives of QTBIPOC students at UCLA. (Ashley Kenney/Daily Bruin senior staff)

This year, the project’s second iteration was presented at the 2022 QTBIPOC Conference on May 7 – a statewide summit honoring the advances made by queer people of color amid various social and institutional pressures – which hosted the theme “Blooming” and highlighted queer and transgender people’s ability to flourish through community and care.

Warri, the developer of the project and a former assessment and engagement intern at the LGBTQ Campus Resource Center, said a project capturing QTBIPOC students’ experiences on campus had never been done before.

Alumnus Smriti Nagarajan, a former assessment and engagement intern at the LGBTQ CRC, said they joined the project because they wanted to support students like themselves who initially struggled to connect to other QTBIPOC students.

“Knowing that a lot of people come out for the first time on college campuses … heightened, in my mind, the importance of this work,” said Nagarajan, who worked on the project during its first iteration in the 2019-2020 school year with Warri.

Nagarajan said they originally focused on understanding QTBIPOC students’ attempts to find community and safety at UCLA. However, the start of the study coincided with the onset of the COVID-19 pandemic, which created uneasiness for many participants who were forced to return home and lacked a safe space to talk about their personal experiences, he added.

Warri, now a social welfare doctoral student, said it was important to her that future versions of the project be conducted by queer and transgender students of color because they are often underrepresented in research.

Taylor Vassar, a third-year statistics student and assessment and engagement intern working on the project, was interviewed by Warri and Nagarajan for the first iteration. As an interviewee, she said she was grateful to partake in a project specifically tailored to queer students. While she had been involved in Black student focus projects, she added that it is important to discuss the intersections in experience between the two groups.

This year, as a researcher, she said she aims to create a safe space for QTBIPOC students to share their experiences and continue the legacy of the first iteration.

“That means a lot to me because, as a queer woman of color myself, I really just wanted to delve into other people’s experiences who are queer or trans-identified and a person of color, and really just learning more about communities that I’m not from,” Vassar said.

“I think blooming, in essence, really represents branching out from the binary and going for whoever makes you happy, what brings you joy and pleasure, and just what makes you in terms of self-identity – blooming beyond just the typical male, female, straight, gay,” she said.

Vassar also said she wants to treat participants as individuals with stories to tell, not just a statistic. She wanted to combine the statistical aspects of her research with aiding marginalized communities such as QTBIPOC.

Research conducted by those who represent the populations they are studying is more reflective of their community’s needs, Warri said, adding that they often conduct research more respectfully, ask better questions and safeguard certain experiences.

“That’s not to say that … people who aren’t from a population would never be allowed to do research on another population,” she said. “But what we’re saying is, when it comes to queer and trans people of color who represent multiple minoritized identities, research has often gotten us wrong, detrimentally.”

Nagarajan said the project also unintentionally connected students with specifically tailored resources during interviews, such as cultural organizations. At UCLA, campus resource centers can be disconnected, which forces students to prioritize certain identities over others, they added.

“You’ve got one international student resource center (and) you’ve got one academic counseling unit,” Nagarajan said. “And the problem with that is that students who are participating voiced this idea of, ‘You can only do so much with your day,’ and so students have to decide which identity they’re going to prioritize.”

They also said they worked to implement changes based on the findings of the original survey by providing action items for several on-campus organizations such as the Community Programs Office, the Transfer Student Center, the LGBTQ CRC and the Graduate Student Resource Center. One main course of action he suggested was providing information about other resource organizations on campus that may be helpful to students.

Based on her interviews with participants, Vassar found that the COVID-19 pandemic gave students time to discover their identities. Many students used social media platforms like TikTok to learn about sexuality and to come out, she said.

Vassar said she recently helped present their research to several academic departments. She said she shared information about allyship – such as how to refer to people with multiple pronouns – to around 40 faculty and staff at a Zoom meeting.

“You’ll always have new staff coming in that’s like, ‘Oh, how do I be an ally? A student came to me that’s trans-identified, how do I point them in the (right) direction?’” Vassar said. “So (I) definitely want to keep going.”

Ultimately, Warri said she designed the project so it could constantly evolve through each iteration, adding that she wanted each future researcher to contribute their own new ideas to the project.

“In terms of going through a process to create positive change, I think that this project is a process,” Nagarajan said. “And it’s long, and it’s drawn out, and you’re working with large amounts of data, but the goal is (a) metamorphosis from something completely different and (into) something better, which is why I also think that the project has done really well.”