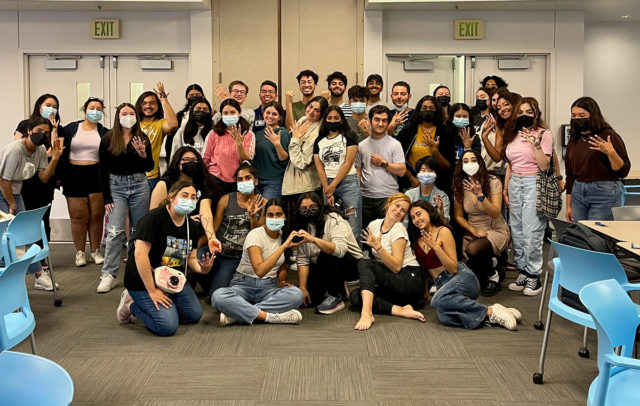 The Club Sampling Club is pictured at a collaboration event with Henna with a Heart. Students said the CSC has helped them try new activities without demanding the commitment other student organizations usually seek. (Courtesy of Ahmed Shurbaji)

Ahmed Shurbaji would not accept that time might limit him to experiencing only a few of the more than a thousand clubs at UCLA.

As a transfer student in his first year at UCLA, Shurbaji said he was hoping to create a new club to form a community on campus and make the most of his time.

He said he was struck by the idea for the Club Sampling Club last summer and immediately got to work planning and gathering students. The CSC organizes events with other student organizations to allow students to experience a multitude of clubs throughout the year without committing to any – even the CSC, said Shurbaji, a third-year psychobiology student and president of the club.

The club welcomes all students without any official fees or other commitment to membership or attendance, he added. The club’s board, which consists significantly of other transfer students who had similar hopes, aims to ensure that any student who hopes to participate can do so without barriers, Shurbaji said.

“Even freshmen, they want to experience all these different clubs. They usually overcommit, and they realize later they’ve got to drop clubs,” Shurbaji added. “But transfers, they’re trying to pack in four years of experience in two years.”

UCLA has been helpful with funding their collaborative events with other student organizations, Shurbaji said, adding that the university helped fund one of their recent events. He said additional funds have come from an unexpected opportunity. In one event this year, club members were paid to sit in the audience of the competition television show America’s Got Talent, earning around $1,600 that has helped keep the CSC active and its events free for students.

Throughout this year, the club has typically met once every couple months in a special event or collaboration with a new club. This school year, they have had four total events, including a speed friending event, a collaboration with student organization Henna with a Heart, the visit to a showing of America’s Got Talent and a club T-shirt-making event at the UCLA MakerSpace.

Although the club’s board keeps an open mind toward potential collaborations, their current lineup of events tends to gravitate toward clubs centered around skills approachable to beginners, such as a form of art or physical activity, Shurbaji said. About 50 students attend each individual event, and 300 are a part of a CSC group chat, he added.

Next year, the club plans to meet more often, with events about twice a month, Shurbaji said.

Some upcoming clubs the CSC is working to collaborate with include the Spikeball Club and the Juggling Club at UCLA, which Kyle Martin, a third-year microbiology, immunology and molecular genetics transfer student and CSC vice president, said he personally is very excited to try.

The club has helped push him to meet others and explore what UCLA has to offer, he added.

“When I first got here, I didn’t feel like I was involved that much,” he said. “Being with the transfers and starting this club with friends I knew from summer, I actually really enjoyed, (it) helped me get out of my comfort zone.”

Student attendees have expressed interest and enjoyment for the club and its events, Martin added.

Ali Tazhibi, a third-year biology transfer student, said he has made new friends and found new hobbies and resources on campus because of the club, which has been especially important to uplift his experience as a transfer student. He had previously not planned to join any clubs because of a lack of free time to commit, he said, but the CSC made the option accessible.

Tazhibi attended three of the CSC’s four events this year and said he plans to attempt attending every event they host next year. Since joining the club, he has discovered the UCLA MakerSpace and been able to get a chance to try Henna with a Heart, a club he had been longing to visit, Tazhibi added.

He now plans to revisit Henna with a Heart and continue to use the UCLA MakerSpace, which he is currently using to put a UCLA decal on a tote bag and wants to use for future fashion projects, he said.

“I’ve gone to the MakerSpace three more times after that (the CSC event) because I didn’t even know it existed to be honest, but just the activity and getting to work on your own piece of art and showcase your creative art with other people was just the best experience,” he said.

Friends at other universities are interested in taking inspiration from UCLA’s CSC as well, Tahzibi said, adding that after he told friends from his previous university, Moorpark College, about the organization, they are now planning to start their own club sampling club there this fall.

The CSC is also planning to incorporate new types of events and community building into their plans for the upcoming year, Shurbaji said. They have begun incorporating cultural snacks at CSC meetings to help strengthen connections among the diverse array of students that attend their meetings, he added.

CSC leaders are also discussing potentially offering field trips to sample the city – such as to a zoo or aquarium – or possibly hosting a beach cleanup, Martin said.

The club has often served as a fun and relaxing respite from studying and other stresses of life as a student, Tazhibi said.

“I’m a big promoter of the club myself because I’m just so proud of it and how far it’s come,” Tazhibi said.“I firmly believe that it is worth (it) to give it a shot and attend an event at least to just see how things are. It’s good not to have to commit to a club before you know what it is.”

Montemayor is currently the 2020-2021 features and student life editor. She was previously a News reporter, Photo contributor for the news beat and Arts contributor. She is also a second-year global studies student at UCLA.