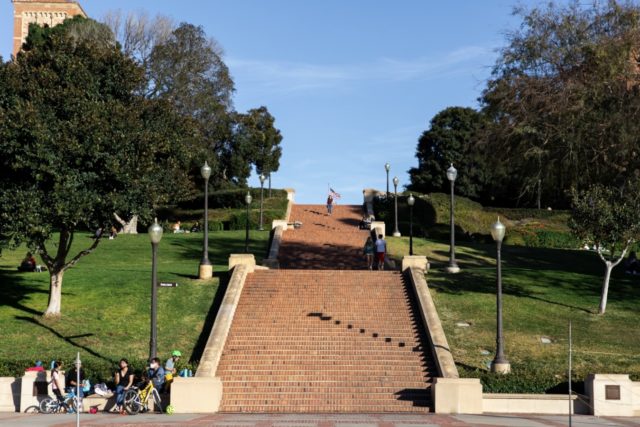 The Janss Steps are a central location on campus. UC community members stressed the importance of participating in the midterm elections, especially for the governor and Los Angeles mayoral elections that impact UCLA students. (Ashley Kenney/Daily Bruin senior staff)

University of California community members are stressing the importance of student votes in the upcoming local and federal elections because of the potential changes to policy for issues affecting students such as homelessness, inequality and resource allocations.

Two of the most important upcoming elections for UCLA students are the California gubernatorial and Los Angeles mayoral races, said Jim Newton, a lecturer of communication studies and public policy and an editor for Blueprint, a policy journal published by the Luskin School of Public Affairs.

Newton said he believes Newsom is almost certain to win reelection, as there are no challengers with enough support to unseat him. Newsom won the gubernatorial race in 2018 and maintained his office after a recall attempt to remove him from office in September 2021, according to Ballotpedia, a digital record of United States politics and elections.

The governor is the principal official directing California’s resources to deal with issues such as climate change, homelessness, income inequality and housing, Newton said, adding that they also control the indirect and direct flow of educational resources to public schools and universities. For this reason, the gubernatorial election especially impacts UCLA students as members of the public higher education system in California, he said.

The cost of housing is one of the most prominent issues that needs addressing in LA, said Chris Tausanovitch, an associate professor of political science, in an emailed statement. He added that since Democrats are expected to remain in control of California – as it’s a left-leaning state – voters will need to watch whether or not politicians are willing to make difficult political decisions in exchange for a housing supply increase.

“It directly affects quality of life as well as having vital implications for our ability to grapple with other important issues such as the state of the economy, homelessness, inequality, traffic and climate change,” Tausanovitch said in the emailed statement.

Newton said the LA mayoral race will also be important for UCLA because the mayor affects issues such as crime, safety, homelessness, pricing and equality.

During the June 7 race, neither of the two frontrunners, Congresswoman Karen Bass and real estate investor Rick Caruso, received more than 50% of the votes, according to the LA County Registrar-Recorder/County Clerk. As a result, a runoff election will be held Nov. 8, the day of the Congress midterm elections.

Bass and Caruso don’t have radically different opinions, but they do have distinctly different ways of approaching campaign issues, Newton said. For example, Bass proposes addressing the root causes of homelessness, such as affordable housing and low wages, while Caruso plans to construct housing and increase police presence, Newton added.

Another important race statewide is for the State Controller, said A.G. Block, the former associate director of UC Center Sacramento – the UC’s teaching, research and public service program – in an emailed statement. The State Controller helps offer fiscal advice and guidance to local governments and controls the spending of state funds, according to the California State Controller website.

Beyond California, there are other contentious races that will impact the political landscape prior to the 2024 presidential elections, Newton said.

Newton said that, in the federal government, the incumbent president’s party typically loses ground in the House of Representatives and Senate during the midterm elections. This is most likely because voters not in favor of the incumbent party are more likely to vote to express their dislike of the political status quo, according to FiveThirtyEight, a website that analyzes opinion polls and politics.

While there are some House races in California to watch, a majority of the swing districts, where voters could go either way on the political spectrum, are elsewhere, Block said.

The presence of former President Donald Trump on the campaign trail confuses midterm predictions for how well Republican candidates will perform, Newton added. He said, while individuals inclined to vote for Trump-backed candidates are often motivated to cast their ballot in primary elections, these candidates raise concerns in general elections because their often extreme views alienate the rest of the party’s base.

Tausanovitch added the midterms will likely mark the end of the period in which the Biden administration can effectively pass bills because potential incoming Republican politicians in Congress are unlikely to vote for Biden’s policies.

Newton said he hopes UCLA students will realize how important it is for them to vote to enact the change they wish to see.

“I hope that UCLA students do recognize the stakes for themselves and not just for themselves in a selfish way but for the state and the city and these elections,” he said. “I certainly hope that students sense an obligation to participate.”

The election primaries were held June 7, and the midterm elections will occur Nov. 8.