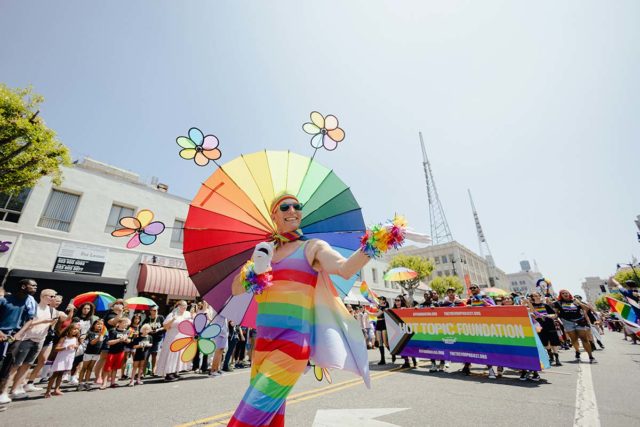 Thousands of Los Angeles residents met on Hollywood Boulevard for the LA Pride Parade on Sunday to celebrate the LGBTQ+ community. LA Pride 2022 was the first in-person event after the COVID-19 pandemic prevented the annual celebration from meeting in person for two years. (Shengfeng Chien/Daily Bruin)

Correction: The original version of this article misspelled Carl Barrett’s name in a sentence.

LA Pride is an annual event celebrating the LGBTQ+ community. This year’s event featured several celebrations including concerts, bingo and the LA Pride Parade, according to the LA Pride website. LA Pride 2022 was the first in-person event after the COVID-19 pandemic prevented the annual celebration from meeting in person for two years.

Christopher Street West Association, a nonprofit organization that aims to raise awareness for the LGBTQ+ community, hosted the annual event. The organization started hosting the event roughly 50 years ago, according to the LA Pride website.

Gerald Garth, the vice president of community programs and initiatives for LA Pride, said in an emailed statement the event’s 50th anniversary was supposed to be celebrated in 2020 but is being celebrated this year instead because of COVID-19 pandemic restrictions in the past two years.

The event began Saturday with several artists – including Christina Aguilera, Anitta and Syd – performing at the LA Pride in the Park event at the LA State Historic Park, according to the LA Pride website.

Garth said in the statement that LA Pride organizers are excited their music line-up features a diverse group of women and people of color.

Mitch O’Farrell, an LA city council member and parade attendee, said he thought Hollywood Boulevard was the right location for the parade, and the council jumped at the opportunity to bring it to the location.

“We want everybody to be who they are and to be able to love the person they love,” Schiff said. “(I’m) very proud to be out here today and celebrating with people and just, really, the togetherness in the love and the joy.”

Cassie Brighter, an activist at the parade, said the event’s turnout gave her a lot of hope for the future of the LGBTQ+ community.

“This is giving me a lot of hope that I really needed,” Brighter said.

Garth also said in the emailed statement that LA Pride featured initiatives to support the LGBTQ+ community – including Pride Makes a Difference, a volunteer, donation and community engagement program, and Pride 365, a program to improve LGBTQ+ inclusivity in society and the workplace.

UCLA Health was a sponsor for LA Pride and had booths at many of the event’s activities, including the parade and concert, said Carl Barrett, a programs manager at UCLA Health. The booths focused on LGTBQ+ health and distributed literature, wellness information and sunscreen, he added.

“We’re really reaching out, and including that would be the LGBTQ community in West Hollywood,” Barrett said.

Holly Seely, a student services advisor for comparative literature and LGBTQ studies at UCLA, said in an emailed statement the return of LA Pride resonates with the LGBTQ+ community at UCLA, especially since many LGBTQ+ students are seeking ways to connect with others.

Beyond the celebrations, Garth added in the statement that LA Pride is primarily a protest to spark social and political change for all communities, including Black, Latino and transgender communities.

“While we celebrate, we can’t forget there is still work to be done as legislation and society still forges attacks on our communities,” Garth said. “We should be reminded that Pride is still, and will always be, a call to action.”