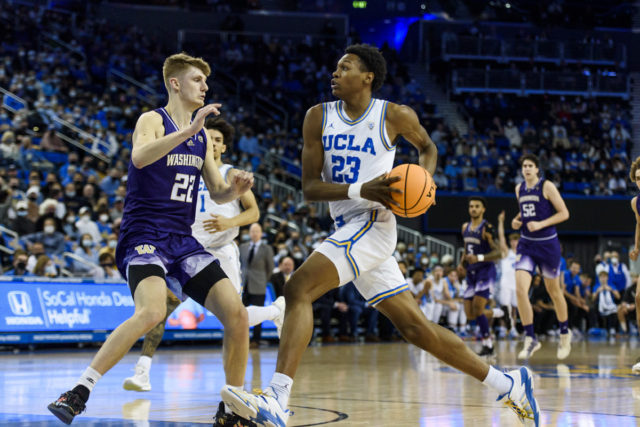 UCLA men’s basketball guard/forward Peyton Watson drives to the rim. Watson was selected No. 30 overall by the Denver Nuggets in the 2022 NBA Draft on Thursday night. (Anika Chakrabarti/Photo editor)

The first one-and-done in the coach Mick Cronin era is officially a first-round pick.

The Denver Nuggets selected UCLA men’s basketball guard/forward Peyton Watson with the No. 30 overall pick in the 2022 NBA Draft on Thursday night. Watson’s pick was originally owned by the Oklahoma City Thunder, but his draft rights were traded to the Nuggets in a deal agreed upon June 13.

Watson is the highest UCLA draftee since former guard Aaron Holiday was selected with the 23rd overall pick in 2018.

Playing in a reserve role for the Bruins, Watson scored 3.3 points per game on 12.6 minutes a night. His minutes dwindled as the season went on, with the former five-star recruit playing just 19 minutes across UCLA’s three NCAA Tournament games. Despite his limited playing time, Watson ranked second on the Bruins with 19 blocks and grabbed nearly four rebounds per game.

With reigning NBA MVP Nikola Jokic headlining the Nuggets’ roster, Watson will stay in the west and join a Denver squad that has made the playoffs each of the last four seasons. Watson – who worked out with the Nuggets on June 16 – will slot in behind forwards Michael Porter Jr. and Aaron Gordon in Denver.

Guards Johnny Juzang and Jules Bernard did not join Watson in hearing their names called Thursday night. Juzang signed a two-way contract with the Utah Jazz as an undrafted free agent following the draft, meaning he will split time between the Jazz and their G League affiliate, the Salt Lake City Stars. Bernard signed an undrafted free agent contract with the Detroit Pistons on Friday morning.